No Shame in their Game: Legends fights tough battles in Edmonton, Las Vegas

The Legends MMA team stepped up in back-to-back pro and amateur battle, respectively, in the past week, and despite coming up short on hands raised, the team more than earned moral victories for their efforts and marked improvements.

Veteran pro fighter Matt “Sabretooth” Horwich, along with wife Kelly and Legends head trainer Chris Reilly, traveled up to the River Kree Casino in Edmonton, Alberta, Canada, for Elaine McCarthy’s new “Lets Get It On” promotion, which debuted on April 24th. Horwich, a former IFL Grand Prix champion and UFC veteran, faced an old nemesis in Jason “The Athlete” MacDonald, another UFC alum.

Not only was this Horwich’s first bout of 2010, but also in many ways his first bout since joining Legends MMA. The Pacific Northwest native has been training at “The Brickhouse” since October, strengthening his cardio and technical skill sets. As such, this three-round rematch (from a first-round submission victory over MacDonald six years ago) was Horwich’s first chance since relocating to experiment with his new arsenal, and despite the decision, the recently-anointed “Sabretooth” was very pleased with the upgrades.

“I do feel really good about [getting new skills and strategies]. I was able to get some good clinch work. . . I was happy I got to work my rubber guard, and did a lot of good stuff in the fight. I went out of the fight feeling like a winner, even though I didn’t get paid like one,” he commented. 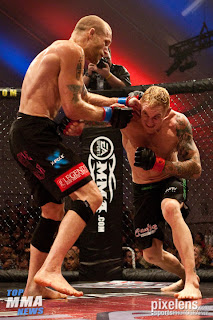 The first round saw Horwich clinch up early, forcing MacDonald into the cage. MacDonald slipped some knees in and tried wresting control with a single-leg takedown, but Horwich kept it a standing match with balance and knees of his own. Horwich sprawled on a double-leg attempt, getting top position on the ground inside MacDonald’s guard. MacDonald held him with a high closed guard and worked for a kimura the last 20 seconds of the match, but Horwich was able to post up and maintain control from top position. In round two, both men threw combinations at the onset. MacDonald immediately went for the single-leg again, with Horwich pulling him back to the side off the age. Horwich eventually got out and threw more knees from the clinch. The two traded punches, and a high kick from Horwich, before MacDonald grabbed Horwich against the cage in a body clinch that, peppered with foot stomps, would compose most of the round. MacDonald briefly got the match to the ground, but it wasn’t long before Horwich was up again. Horwich then scored a trip takedown of his own, moving to side mount for the rest of the match. With seconds left in the round, Horwich tried to take the back, but MacDonald claimed top position right at the bell. MacDonald scored a takedown early in the third round, but Horwich dominated from the bottom with an uma plata for over a minute. MacDonald was able to eventually stand up, and fell into Horwich’s half-guard, where he would stay for the rest of the match,with a punch. MacDonald slipped some headshots in, but Horwich neutralized most of his offense with a tight collar tie-up. It could be argued that MacDonald was in top position for more of the third round, but Macdonald’s “half-mount” position and striking was much less threatening of a finish than Horwich’s uma plata submission earlier.

In his post-fight interview, Horwich told the crowd “Jason’s a great fighter. He did an awesome job. I think because I’m on my back in guard doesn’t necessarily mean I’m losing the fight. But it’s an honor to fight him. It’s always awesome to be in Canada. Al the people are great, once I get through the customs.”

“It was such fuckin’ bullshit,” said Horwich’s wife, Kelly, of the judges’ scoring.

However, the Horwiches were complimentary of Elaine McCarthy’s first MMA production, noting “the promotion was excellent. They treated us really well. The motel was nice, food was good.”

Roughly one week later and 1,500 miles south of the Great White North, the trio of Benjamin “Bird Dog” Sample, Jacob Rockymore, and Ryan Lupkes fought on the second Las Vegas Mixed Martial Arts show, “Rising Stars of MMA,” on May 1st, at the Plaza Hotel & Casino in downtown Las Vegas.

Although Perez scored several takedowns over three rounds, the majority of the match was spent on the feet, where Rockymore continually attacked with rapid fire combinations that pushed Perez backwards. The first round was a back-and-forth battle, which proved to be the overriding theme of the match. Perez scored a takedown in the second and came close to a choke and armbar at separate times, but Rockymore was able to escape without serious threat. In the final round, Perez again forced a takedown, but Rockymore trapped him with rubber guard, and was working for an uma plata before getting stood up. He went into combination overdrive in the last ten seconds of the match, forcing him into the corner as the bell rang.

T.J. Perez was awarded the match via split decision.

“It was like a street fight, but with more skills than a street fight. It was real fun. Can’t wait to get back in there,” Rockymore commented the next day.

“Jacob really impressed me. He’s a brawler,” said Sample. “I was surprised, because he’s so small. He’s 125 lbs, and I could see the anger in his punches. I could see he was really trying to take the guy out. He caught the guy with a couple shots and I’m like ‘whoa, that was a hard shot. Where’d that come from?’”

The newly-anointed “Bird Dog” was on the hunt for avenging his debut, in which he came up on the short end of a unanimous decision. He opened the first round with a high kick, baiting Parson into throwing a wild combination before Sample dropped him with a left hook. Sample pounced and got his hooks in on the ground, but chose to keep it standing, when he was unable to flatten Parsons out. Parsons returned the striking favor, dropping Sample fast with a left hook of his own, but the Bird Dog recovered swiftly back to his feet. Sample opened the second round with another high kick, keeping distance with additional right kicks and a spot-on body shot. Parsons scored two takedowns in the round, the second of which Sample reversed. Early in the third round, Sample shot in under a Parsons combination, but in doing so, caught a high kick to the head, which immediately put him out.

Spirits barely dashed and hardly deterred, Sample spoke confidently about the outcome and the prospects for his future fights: “They say ‘champions aren’t born, they’re created.’ So it may take me a little more time. . . I feel like any given night, one of us could have knocked each other out. Had it been the following weekend, I may have got the best of him. The weekend after, he may have got the best of me. But I definitely can’t wait for the next fight.”

“Ben was real explosive,” said teammate Lupkes the next day. “They were just coming forward, full speed ahead, and just going at it. But Ben was definitely on top of the exchanges . . .He’s a bad motherfucker.”

With Bowler’s trademark hiptoss-neck crank combination well-scouted, the first round was largely a feeling out period for Lupkes. The match did go to the ground after a Bowler bodylock, but Lupkes was able to scramble and gain top positio, in guard. From there, Lupkes threw ground-and-pound and worked to pass guard. Round two saw Lukpes land a head kick, but Bowler was also later able to catch him on the ground with a head-and-arm choke. Lupkes was able to hold on, and get a restart in the middle of the ring. In the final stage, Lupkes claimed top position and worked to pass, but Bowler powered a reversal and took side control. After a referee’s stand-up, the two clinched, with Lupkes again ending up on top just before the match ended.

“I feel like if I had another 30 seconds, I would have won. I was on top twice, but he was on top for the majority of the rounds, so I can’t really argue. It depends on how you want to look at it,” said Lupkes after the match.

Despite the losses, all three protégés were in high spirits in the aftermath, speaking with confidence about the lessons learned and the trainers that stood beside them.

“Conor [Heun] is really in touch with how you relate to the environment, and how to summon your inner strength. That really helps during a fight. And Reilly, he’s totally kick-back. ‘Hey man, just get out there, have some fun, give 110%. Make it do what it do.’ Working with both of them is really good. I couldn’t ask for better coaches – striking coach and wrestling coach. It’s just a matter of me getting in there and implementing what they want me to do,” praised the Bird Dog.

For Lupkes, Reilly’s Muay Thai tradition spoke to the young fighter and helped flip the ‘on’ switch right before going into battle: ”Right before we were about to go, he just grabbed my hands and put them together, Thai style. We just put our heads together. I can’t remember – it was like a mantra; he kept saying something like ‘Ryan, go win this fight’ or ‘Ryan’s a great fighter.’ Right in that moment, it totally focused me. It was like ‘let’s do this shit, man!’”

In other Las Vegas MMA action that night:

Sample and Rockymore will return to training after their respective medical suspensions, while Lupkes anticipates fighting as early as the end of May or sometime in June. Matt Horwich is wasting no time getting back to action, as he faces Tom “Kong” Watson on May 15th at the LG Arena in Birmingham, UK, for the vacant British Association of Mixed Marital Arts (BAMMA) middleweight 185 lb. title.