Join us this Saturday for UFC 103 at Big Wangs Wings in Hollywood! 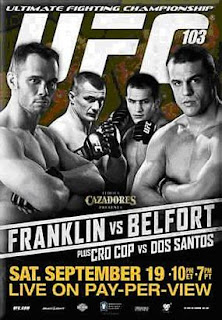 Note: Spike TV will be broadcasting prelim matches at 6:00pm, one hour before the PPV start time. Feel free to come by earlier than the usual 7:00pm start time.

They say everything’s big in Texas, where UFC 103 is being held, but to be sure, it’s Hollywood where you’ll find the big wangs of MMA, as Legends MMA and Big Wangs Wings hosts another UFC viewing party.

With a mix of three former world champions and several up-and-coming international heavy hitters, UFC 103 could easily prove to be one of the most explosive slobberknocker shows of the year. And just like the fighters themselves, the food portions are huge, the drinks are strong, and the girls that serve ‘em are sexy and sweet.

The high kick headhunder Mirko Cro Cop takes on Junior dos Santos, a hard-hitting Brazilian heavyweight who hasn't needed more than 90 seconds to finish either of his previous UFC opponents.

Fights start at 7:00pm, but fans are encouraged to show up at 6:30, as Wangs gets packed fast.

Hope to see you at the fights!
Posted by Legends MMA at 12:36 AM