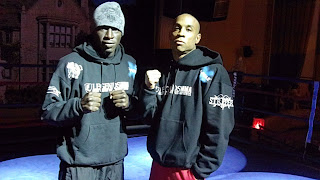 Taking a break from the team’s usual usual jaunts out to Vegas to compete, Legends MMA’s Ben Sample and Eugene Marenya made their California debuts earlier this month, April 7th, at the On-Broadway Events Center.

“It’s an out-of-body experience when you’re inside the ring,” said Sample about his debut.
Titled, “Fight Night to the Playboy Mansion,” the evenings matches were part of the annual National Indian Gaming Association conference and trade show. The semi-private event consisted of three MMA and four kickboxing matches, and featured a ring girl competition and guest Playboy Bunnies.

The Playboy-branded “Fight Night to the Mansion” series is a traveling pro-am MMA and kickboxing event which tours throughout the Western U.S. and Canada. 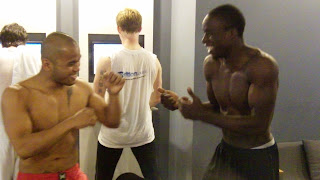 Marenya, a native of North Carolina, relocated out to Los Angeles late last year, with a 3-0 amateur / unsanctioned record.

When asked about the differences between fighting in California and his fights back east, Marenya said “definitely more organized . . .You can get more experience with it, because of the talent level. . . It actually feels like you’re in a big fight, because of the atmosphere.”
Seconds into round one, Caliso’s game plan was apparent, as he immediately shot in for the takedown. With Marenya on bottom, they got caught up in the ropes and repositioned to the center twice. Marenya got the better of a stand-up exchange, but Caliso scored another takedown and full mount before round’s end. Caliso came out in orthodox stance in round two, as both of them fought southpaw in round one. Marenya blocked another takedown attempt and landed some strong knees, holding onto a guillotine as Caliso took it to the ground. Marenya eventually worked mission control and started to set up for an oma plata, but Caliso scrambled and got his back, sinking in a rear naked choke. Marenya survived to the third round, which he opened up with a flying knee that popped the crowd and landed square on Caliso’s head. Caliso survived and clinched him against the ropes, at which point he landed a knee right under the groin. Marenya went down, waving Caliso off. Inexplicably, rather than give Marenya five minutes to recover, the referee called a stop to the match, declaring it a TKO victory for Caliso at R3, 0:38.

Carlos Caliso was awarded the TKO victory at R3, 0:38.

“We were basically just locked up in the clinch, and one of his knees just got a little low, and just got right under my sack. Basically just hurt a lot. And the ref said he had to stop it because I grunted. But I thought that was just a natural reaction . . . because I wasn’t defending myself. I was grunting. He said he had to stop it. He said he didn’t see clearly, see the groin shot. But my competitor, he knew that he hit me in the nuts. He apologized and everything. Great kid.”

After seeing the match on video, Sample gave his thoughts on his teammate’s efforts ““It looks like he fared pretty well. . . He did good standing up. He’s fast as lightning.” 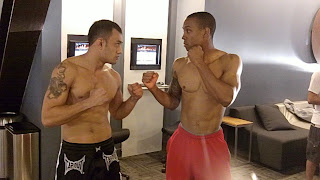 Sample is a longtime Muay Thai student who trained and competed briefly in Thailand in 2007. He also is an avid rock climber, and even competed in several events. Earlier this year, Eddie Bravo awarded Sample a blue belt in 10th Planet Jiu Jitsu.

Sample sparked round one with a punch combination that pushed Blancaflor backwards into the corner. Blancaflor scarped back, and the two went at it around the ring, but Sample clearly got the better of the exchange. Blancaflor pulled the match to the ground, and tried for a guillotine, but Sample was able to stay on top. Blancaflor later caught a kick from Sample and used it for a takedown. Sample immediately grabbed mission control, but Blancaflor posted up to throw body shots until the referee restarted them away from the ropes. In round two, Sample charged in with a flurry, but Blancaflor got him to the ground and took side control, throwing combos from top position. Blancaflor got to his feet and kicked at Sample’s body before the referee stood Sample up. Sample fired a left-right combo and grabbed a front facelock, landing a knee before Blancaflor scooped him up for a high takedown to end the round. Round three saw Blancaflor shoot in for another takedown, but Sample rolled through it, ending up back on his feet. Blancaflor later landed another takedown and worked to pass guard, but not before being stood up again. Blancaflor was ground-and-pounding from top position just as the bell rang.
Blancaflor was awarded the match via unanimous decision.

For Sample, regardless the outcome, the big triumph was in turning the corner past his debut match. Throughout 2009, several opportunities to fight had fallen through, which made the process of a first fight all the more relevant.

“Pop that cherry, man. Getting that out the way. . . Try to embrace this time. I’ll never get it back. It’s my first fight experience. My first MMA fight experience. Just try to soak it all up, let it all in . . .Now I’ll be a little less anxious going into the next fight,“ he lamented.

Reciprocating the analysis, Marenya talked about Sample’s match: “He went out there and he banged. The kid didn’t want to stand with him, I know that. He definitely was itching for a takedown. . . In every stand-up exchange, the guy would just ball up and look for a takedown. He was rocking him a few times. He was definitely banging.”

Ben Sample will be fighting again on May 1st, at the Plaza Hotel & Casino in downtown Las Vegas. Eugene Marenya anticipates a fight in the very near future.