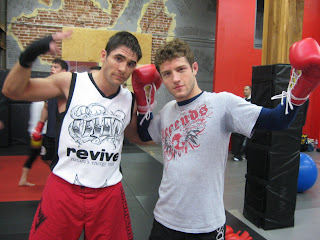 It was recently announced that Legends' / 10th Planet's own Conor "Hurricane" Heun will face off against KJ Noons at Strikeforce's June 16th event at LA Live's Nokia Theater. The event is scheduled as part of the E3 Convention, which takes place at the LA Convention Center.

Noons' original match, a rematch against Charles "Krazy Horse" Bennett, fell through when Bennett was forced to withdraw from the match. With no opponent for Noons, a former EliteXC Lightweight champion, Heun, himself originally scheduled to face R.J. Clifford (3-1-0), got the nod to fill in.

Congratulations to Conor for the new challenge! Legends MMA, 10th Planet, and BeSpun will be on hand for this career-defining moment.

Below is the official Strikeforce press release:


Tickets On Sale; Telecast Begins At 11 P.M. ET/PT On SHOWTIME®

LOS ANGELES (June 3, 2010) – An excellent lightweight (155 pounds) scrap between former world champion KJ Noons (8-2) of San Diego, Calif., and Conor “Hurricane’’ Heun (8-3) of Hollywood, Calif., by way of Boulder, Colo., will round out the televised portion of fights on SHOWTIME® when STRIKEFORCE steamrolls into Nokia Theatre L.A. LIVE on Wednesday, June 16.

The first-ever STRIKEFORCE event scheduled for mid-week will take place in the midst of the E3 Expo, the premier trade show for computer and video games. During E3 Expo 2010 at the L.A. Convention Center, EA SPORTS™ will exhibit its highly anticipated title, EA SPORTS MMA, in which STRIKEFORCE is featured as a premier league.

Tickets are on sale at STAPLES Center box office, all Ticketmaster locations (800) 745-3000, Ticketmaster online (www.ticketmaster.com) and STRIKEFORCE’S official website (www.strikeforce.com). Tickets will also be sold at the Nokia Theatre L.A. LIVE box office on days when events take place there.

The SHOWTIME broadcast will begin at 11 p.m. ET/PT (delayed on the West Coast).

Noons will be making his STRIKEFORCE debut and fifth start on SHOWTIME. He has won four consecutive fights and is 7-1 in his last eight outings. His last defeat came to Charles “Krazy Horse’’ Bennett on Feb. 10, 2007, in the opening bout on the historic first MMA fight card ever broadcast on network premium television (SHOWTIME).

A confident, prolific striker, Noons is the last fighter to defeat current STRIKEFORCE welterweight champion Nick Diaz. In a thrilling, bloody fight on Nov. 10, 2007, Noons won by first-round TKO when a cageside doctor stopped matters after the round due to excessive cuts around Diaz’ eyes.

Following a near-two-year respite to continue a boxing career, Noons returned to MMA and won a decision over Andre Armado at DREAM 13 last March 22.

“They’re a lot of good fights out there for me in STRIKEFORCE,’’ said Noons, a former EliteXC 155-pound titleholder. “I’m looking forward to getting a good win and moving on to bigger and better things. Fighting in Los Angeles is very cool. I’m sure I’ll have a lot of friends and fans there rooting for me.’’

The boyishly handsome Noons, who was born and raised in Kailua-Kona, Hawaii, has been fighting for more than 20 years.

"My father was a professional kick boxer so I've been in martial arts since I was five or six years old and boxing and Muay Thai since I was eight or nine,’’ he said. “I've been doing this forever and finally it's my time to shine again and I'm ready."

Heun, a Brazilian Jiu-Jitsu purple belt who prefers to kickbox in the cage, is a superb athlete and former IFL and EliteXC fighter who turned pro in 2006.

The 5-foot-10, 30-year-old Eddie Bravo-trained fighter is competing for the first time since losing his STRIKEFORCE debut on a decision in one of the most entertaining brawls of the year to Jorge Gurgel during a STRIKEFORCE: Challengers event on June 19, 2009.

The setback in a fiercely contested, electrifying slugfest between two ground fighters that gave the fans a kickboxing exhibition stole the show. At the conclusion of a grueling, non-stop-action encounter fought at a catch weight of 160 pounds, they got a standing ovation.

Bloodied and battered, the athletes “put on a fight for the ages at 160 pounds,” SHOWTIME announcer Mauro Ranallo commented during the telecast.

“I may go home a couple of bucks shorter and with some scrapes but that was the most fun I’ve ever had. I live for those 15 minutes,’’ said Heun, who was the stronger fighter at the finish despite coming up short by the scores of 29-28 and 30-27 twice.


The loss ended a three-fight winning streak for the aggressive-minded Heun, who entered the bout, his first in nine months, having won seven of eight.


Heun is anxious to put together another winning streak, beginning on June 16. “I’ve been eyeing a fight like this, and have been calling out Noons for a long time,’’ Heun said. “I’m beyond thrilled this fight was made. If Noons thinks this is going to be easy, he is in for the surprise of his life. This is my time’’

Before turning to MMA, Heun was a Division III National Qualifier wrestler at the University of Ithaca where he majored in English. After graduating, Heun did not enter MMA immediately. Instead, he went into the corporate world and even owned his own clothing apparel line. He would later leave Colorado and move to California where he began to work as a dental assistant. A little more than a year ago, Heun beat up a bully MTV's "Bully Beatdown.''

Doors at Nokia Theatre L.A. LIVE will open for the event at 6:15 p.m. PT. The first non-televised preliminary bout will begin at 7 p.m. and the first main card fight will begin at 8 p.m.