STORMY WEATHER AHEAD: THE HURRICANE RETURNS TO STRIKEFORCE 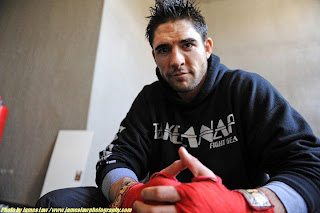 After a year’s layoff, Legends MMA / 10th Planet’s Conor “The Hurricane” Heun returns to Strikeforce action this Wednesday, June 16th, as part of “Strikeforce: Live.” Moreover, the former Division III wrestler-turned-10th-Planet-brown-belt comes in for no tune-up match, as he faces his highest-profile and possibly most dangerous opponent to date, KJ Noons.

“KJ is a very talented fighter. Very strong, very dangerous. I’m sure it’s going to be a hell of a fight. Definitely not taking it lightly,” said Heun.

As was previously reported, Heun was scheduled to fight RJ Clifford on this same event. Noons, a former EliteXC lightweight champion, was preparing to fight Charles “Krazy Horse” Bennett , in a rematch of their January 2007 bout. That first bout ended when Bennett KO’ed Noons midway through the first round.

However, when Bennett was forced to pull out of his June 16th date, Heun was reassigned to Noons. This new pairing raises the bar for Heun, as Noons comes with bigger credentials and, with victory, more potential reward.

“When I got that fight, I told them I needed to think about it. I hung up the phone and cried for five minutes. Then I called them back and said ‘fuck yeah, put me on that card’,” he recalled.

This match represents not just a professional, but also a personal climax to Heun’s past 12 months. Following his show-stealing three-round war with Jorge Gurgel at the second Strikeforce Challengers show, Heun was forced to undergo ACL replacement surgery, which found him inactive and frustrated for months. Faced with a growing pile of bills, his main gym in transition to its new location, and several important personal relationships strained, storm clouds were brewing for the Hurricane.

“I was in a dark place, sitting on my couch. . . Peaks and valleys. That was my valley, now I’m ready to hit my peak on Wednesday,” said Heun.

A victory over Noons could quickly reestablish Heun as a quick-rising star in the Strikeforce ranks. Prior to his Gurgel battle, Heun was 3-0 since 2007, with two wins in EliteXC, where many expected him to fast-track to a title shot. Unfortunately for Heun, EliteXC went under in 2008.

Ironically enough, their lightweight champion at the time was none other than KJ Noons.

“Opportunity knocks, you gotta answer the door. We’re never given anything that we can’t handle, and it’s my time.”