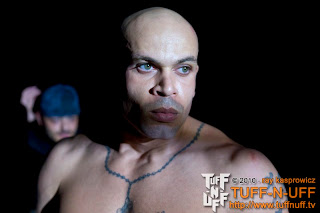 Some called him “Action Jackson.” He called himself “The Knockout Artist.” Going forward, people can call Eddie Jackson “champ,” as he claimed the Tuff-N-Uff 170 lb. championship on October 22 at Tuff-N-Uff’s latest installment at the Orleans Hotel & Casino.

“This is what I’ve been working hard for; this is what I’ve earned, and how that I’ve got it. . . .It’s a personal accomplishment for me. Even though it’s on the amateur level, I worked really hard for this,” said Jackson in his first post-fight interview.

“That was a lifetime performance. That was one of those things that, as a fighter, you always want to be involved in. I think it’ll totally stand the test of time,” beemed trainer Chris Reilly.

The Angelo match was in fact Jackson’s second title shot. In early 2009, Jackson went to the finals of a four-man tournament for the same title, losing by KO to Xtreme Couture’s Kenny Marzolla after catching an unexpected high kick in the first round.

“Everybody knows what happened . . . I promised myself that if I ever had a second opportunity for this, I wasn’t going to repeat history,” he lamented.

Since then, Jackson’s road to redemption had its triumphs and setbacks. He followed up the Marzolla loss with two first-round KO / TKO finishes in August and November. However, the first half of 2010 was spent rehabbing an arm injury that had him sidelined for over five months. Upon his return to action, in July, Jackson finally faced Bill Cooper, whom he was supposed to fight in the 2009 tournament finals before Cooper withdraw due to injury. Again, Jackson faced a first-round defeat, getting caught in a guillotine choke by the jiu-jitsu black belt.

Jackson and Angelo traded a few low kicks in the first minute of round one before Jackson tagged Angelo with an overhand right. Jackson rushed Angelo into the opposite corner and landed a knee from the Thai clinch before breaking apart. Angelo circled the ring’s perimeter and kept distance with a front kick while Jackson looked for an opening. Jackson got another clinch and threw knees, one of which slipped to the groin. After a break, Angelo was able to continue and pumped the jab. Amidst a flurry between them, Angelo got Jackson to the ground, but couldn’t keep him down. Jackson charged with another kick-punch combo and Angelo tried to force his own plumb clinch, but Jackson escaped. In the final seconds of round two, Angelo fired a superman punch, but Jackson took him to the ground and pounded away. Both men started swinging more wildly in the third round. Angelo controlled Jackson with several knees from a Thai clinch, from where Jackson fired lefts and rights. This exchange got a big pop from the crowd. Angelo tried a spinning backfist that also impressed fans. Jackson dropped Angelo with a short right and followed up with more punches on the ground. Angelo regained his composure and tried to set up a triangle choke, firing shots from the bottom. The crowd was ecstatic as the final bell rang. 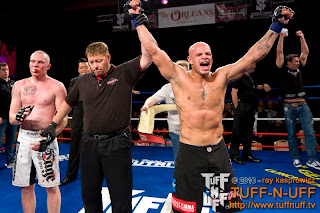 “Because he was southpaw, I had to keep staying on his outside foot, and just whip it. Just waiting for my time, struck him whenever I could. Try to hit him with combos, but he used his distanced pretty good. He stopped me from finishing it off. It was a smart fight for both of us,” Jackson remembered.

For Reilly, by the third round, Jackson was clearly ahead, but that wasn’t enough for him to let Jackson coast through: “I was telling him ‘hey, you won two rounds fair and square, but we’re not counting on the judges up here. You need to go after that guy and knock him out’. . . He did such a sound job that I feel like he didn’t leave any opportunity for anyone to rob us. He did it so convincingly that they had to give it to us, even though I feel like they didn’t really want to.”

“The guy had an amazing chin, because Eddie hit him with shots that anyone else would have gone to sleep. That was certainly all I could ask of Eddie,” concluded Reilly.

Teammate Tommy Gavin also noted Jackson’s improved footwork, especially against a fighter whose reach and stance was unprecedented for the now-champion: “Eddie’s fight was a perfect example of how to cut the outside foot off, and stalk your opponent without leaving yourself open. Joey Angelo was fighting as a southpaw, and Eddie cut him off for the outside leg position for the entire nine minutes. I think that made the difference in that fight.”

“He put himself a step closer to a pro career, and that’s a big-time amateur title. I’m happy for him,” said Gavin in the days after the match. 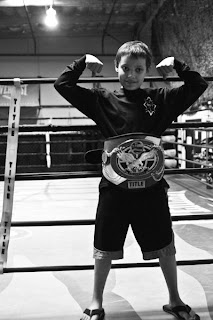 Unfortunately, the night’s events started on a sad but honorable note, as the announcement of thirteen-year old Dylan Woods’ passing was made. Woods, a local boy whose battle with brain cancer became a noted local story and cause that Tuff-N-Uff, Xtreme Couture, and several other fight camps championed over the past year. Woods attended several Tuff-N-Uff events as a special guest, and became a favorite among the fans, fighters, and staff. He was given a 13-bell salute, each ring honoring a year of his life.

According to a friend of the Woods’ family, Dylan would be buried with firefighter honors, as the Las Vegas Fire Department made him a junior firefighter (and "Chief for A Day") just the month prior.

Tommy Gavin was also in action that night, as well as several fighters from Sean Bollinger’s 10th Planet Riverside team. Gavin lost by TKO moments before the end of the first round, which he was decisively winning in the striking game before being taken to the ground and kept down with a series of lefts and rights. Bollinger’s team went 2-1 for the night, with David Tompkins winning by split decision and Trace Gray earning a TKO win at the 0:30 mark of the first round.

Of Gavin’s performance, Reilly reassured “Tommy comes to fight every time. He always lets his hands go. I think his boxing has gotten a lot better. . . But making punches miss is an athletic ability that comes in different levels in people, and it’s something Tommy’s gonna have to really work on.”

Gavin echoed the sentiment, saying “I let that kid have the outside positioning. I’m a southpaw and I can’t do that.”

Legends MMA is sponsored by X-Pole. Tuff-N-Uff’s next event is November 12th at the Orleans Hotel & Casino.

Since starting Ambien, I have experienced lost memory many time. I am so thankful my husband is with me. Otherwise I would have been dead by now. I am try to kick generic ambien. It is a dangerous drug & should be removed from the public.

I've used Ambien prescription for a couple months, probably 2 out of 3 days, and it works great. It makes me able to fall asleep but doesn't knock me out. It prevents me from waking up repeatedly for no reason, but I can still wake for a phone call. I wake up in a shorter time feeling more refreshed than normal. I didn't do anything funky in my sleep either (no strange women or empty fridges so far).