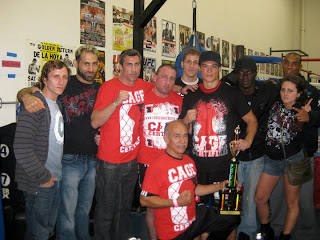 Reilly and Rahnavardi brought Bond Squad brothers ‘Pistol Pete’ and Andrew ‘Worst Case Scenario’ Mostowa, protégés of Rahnavardi’s, along with Legends MMA’s Dustin Mueller and Alan Jouban. Mueller and Peter walked away with decision victories, while Jouban and Andrew both finished their opponents in late in the first round.

“Everybody did real well. My brother’s fight went real well. Probably as good as anyone could have guessed or wanted it to go. Dustin, his fight, he did a lot of good things in it. And then Alan, he’s undefeated . . . that sort of keeps that ball rolling. With us all winning, it just made it a great night,” said Pistol Pete.

“Just knowing that they’re Amir’s guys, you feel like you’re part of the same team. Because Amir is just everybody’s boy. It’s camaraderie,” Jouban said of his teammates for the night.

As one part of the main event, Jouban wasn’t able to watch their matches until seeing video footage after the event, but their continual victories throughout the night helped keep his spirits high and focused during his warm-up backstage.

“When everyone’s winning, that energy, feeding off of it . . . It always puts you at ease when you see them happy and laughing.”

Andrew Mostowa concurred, saying that his older brother’s win helped set the tone for his own debut: “It helped a lot. It was like ‘alright, we have one win under our belt. Let’s make it another one.’ We’re pretty close, so it’s just one of those things.”

Sanchez caught Pete with several shots and a takedown early in the first round. After some scrapping, Pete ended up on bottom and worked to set up a triangle or armbar. When Sanchez stood up, Pete slapped on a tight kneebar which had Sanchez close to tapping. Round two saw similar action. Pete had a mount on Sanchez, who flipped him over. Pete was able to set up an oma plata, but was too crowded against the cage to finish. Round three showcased both men’s stand-up skills. Pete pushed Sanchez against the cage and landed several knees before round’s end.

“It was a real close match that went back and forth, and because I was working the whole time for submissions and the positions I was in, I was trying to get the better position and do something . . . That’s when the judges kind of saw that and gave me the decision,” theorized Pete. 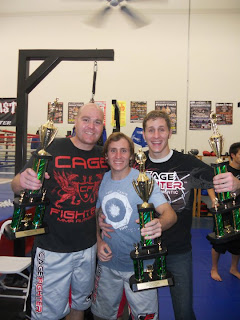 “Peter’s a really good fighter. He’s really complete. . . His last fight didn’t get him much experience. So this fight . . . he learned a lot,” noted Rahnavardi.

Dustin Mueller felt that Pete was particularly strong on the ground, noting “Pete was going for a lot of submissions on the ground. . . He seemed definitely more aggressive in this second fight. . . He was transitioning from one move to the other.”

Though he came in with a significant height and reach advantage, Mueller went through several opponent changes, and subsequent weight class changes, which took its toll on his cardio reserves. After his initial fight (at light heavyweight) fell through, Mueller got booked for a heavyweight scrap, and subsequently started to add weight. However, one week before the fight, his light heavyweight match was back on, forcing Mueller to cut 15 pounds in a week, with no prior weight-cutting experience.

“I learned a lot about my body and my whole self. Because I never got to really cut weight. I just felt weak. It was a weird feeling. But thank God that I won. The next fight will be a lot different for me, for sure,” he said in retrospect.

Elias almost immediately shot in early in round one. He caught a knee from Mueller and used it to score a takedown. Elias stacked himself over Mueller on the ground and threw rights, trying to pass guard, but Mueller kept control of Elias’ head and set up an armbar. Mueller flipped over, but Elias stayed on him and threw headshots from behind. Mueller managed to pop his head out the back door, but Elias scrambled and sunk in a guillotine choke, stuffing Mueller in the corner and taking his back as the round ended. Round two saw Mueller keep the match on the feet for the most part, throwing sporadic combinations. Mueller pushed Elias against the cage with lefts and rights. Elias charged for a double-leg takedown and got it, but Mueller transitioned out to side control near round’s end. Round three saw Mueller kept control of the center of the cage and pressure Elias with combos. Elias went for another takedown and eventually took Mueller’s back, but Mueller flipped him over and threw rights from front facelock top position to the end of the match.

Judges awarded Dustin Mueller the victory by unanimous decision on scores of 29-28.

“Dustin’s married, and he’s got three kids, and he’s got a full-time job. So he’s one of those full weekend warriors. But he did good. He’s the guy that came to Legends when I first started teaching, and he knew nothing. And he was a fat guy, so how far he’s come, I’m so proud,” said Rahnavardi.

The younger Mostowa brother came on strong and kept the pressure on Fiscer with combos and several low kicks. He forced Fiscer against the cage and threw knees until Fiscer went to the ground. Andrew stayed on him with ground and pound until the referee called the match at 1:34 of the first round, awarding the man they call ‘Worst Case Scenario’ with the TKO victory.

Rahnavardi couldn’t have been happier about Andrew’s performance, boasting “he stayed completely on game-plan, did exactly what I told him, and just destroyed him. We call him Worst Case Scenario because he’s more flexible than any human being that you’ve ever met. He’s got awe some hands, awesome kicks, and great ground. So he’s seriously like the Worst Case Scenario for anyone to fight.”

Being his debut match, Andrew conceded that nerves were a slight factor, but that “when you get in the ring, everything goes so fast that it just goes back to your instincts, I guess. And everything that you train, it just comes out.”

Gudino made first contact with several low kicks as Jouban took his time. Gudino got Jouban against the cage, but Jouban clinched and walked into him, getting a trip takedown. Jouban kept top control with a full mount, landing a few lefts. Gudino got to his feet briefly, but Jouban took him down again with a highlight reel belly-to-back slam. Jouban got full mount, but Gudino quickly swept him and landed in guard. Jouban switched to butterfly guard and set up the gogo plata. Gudino tapped moments later, at 1:57 of the first round. 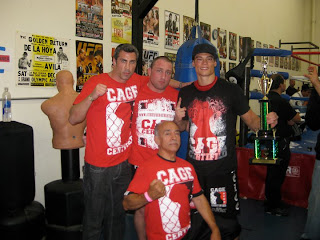 For Jouban, this match represented a big personal accomplishment, and even something of a possible graduation to the pro ranks, a move which is supported by his head trainer, Chris Reilly. Earlier this year, Jouban set the goal of fighting five times before 2011, and not only hit that mark with the Gudino match, but went undefeated in dominating fashion, winning four times via first-round finish, twice by gogo plata submission.

“I didn’t know if I was gonna really be able to obtain that goal. Before I was averaging maybe one or two a year, because of injuries and whatnot. . . It’s kind of played out that way, so I’m extremely thrilled. If I can get my pro fight in before the next year, it would really complete what I wanted to do, starting at the beginning of this year,” he reflected.

To win via gogo plata in an MMA match is rare. To do it twice is almost lightning in a bottle. Ironically, Jouban had intended to keep it a striking match, after his opportunity to make his pro debut a Muay Thai match in Thailand fell through.

“But it was just weird, because it wasn’t as I envisioned the fight. I just kept picturing a beautiful KO. Like some kind of Muay Thai-related head kick or something of that sort,” joked Jouban. “Big props to Alder Hampel. I’ve been working a lot of jits with Eddie Bravo . . . I went to see Alder a couple weeks before my fight, just to kind of fine tune things, and he really came through for me. . . I’m glad that I’m making Eddie Bravo and everybody at 10th Planet proud.”

Combat Fight League returns on December 2nd with an amateur show at the Westlake Hyatt. Both Mostowa brothers expect to return to action on that show. Legends MMA is sponsored by X-Pole.