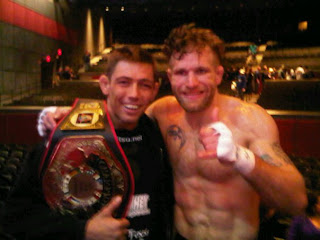 “I lost the first round. . . .My game plan was to come back strong the second round. I won that round, finished him in the third round by TKO. So I was thankful the fight went beautiful. It was kind of like a rope-a-dope in the first round, except it was on the ground, so I guess I’ll call it a ground-a-dope,” joked the ever-optimistic Horwich.

By all accounts, Roshalt’s two takedowns and ground-and-pound in the first secured him the round. Horwich tried to secure a footlock and wear his opponent’s cardio out. Seemingly, the slow-burn worked, as Horwich took over in the second, taking Rosholt’s back and implementing his own offensive of punches and rear naked choke attempt. Rosholt escaped, reversed, and went for a guillotine choke, but sure enough, Horwich had his own escape, moving to side control and forcing more ground-and-pound action to round’s end. Round three saw another Rosholt takedown and Horwich reversal, respectively, before they were back to their feet. Finally, Horwich scored his own takedown, mounted Rosholt’s back, and threw punches at will until the referee called for the end.

For the reigning Powerhouse World Promotions champion, match result wasn’t just an exercise in redemption, but also in the power of positivity.

“There’s a lot of positive momentum going with our team. After I lost my previous fight [at Bellator 28, against Eric Schambari], I heard my teammates storming in, all mad they lost their fights as well. And I felt like God was up to something with it. So I was telling them if we can keep the same positive momentum after a loss, it’s going to be a huge advantage. . . And I told them I’d be telling them ‘I told you so’ after the next fights. And then Brady came and was cornering me for this fight. So after the fight, I said ‘I told you so.’

Oklahoma itself was a welcome trip for both fighter and corner, however, as both share an affinity and reverence for Native American culture and spirituality.

“When I found out we were going to an Indian reservation, I was kind of excited. You can definitely feel it in the air and in the land. It’s a special place,” said Brady.

“We hung out with some Comanches after the fight, because one of them fought. It was a beautiful experience and cool memory,” added Horwich.

As if a weekend win in the Sooner State wasn’t enough good news, Horwich also is close to signing a three-fight deal with the Palace Fighting Championships, located at the Tachi Palace Hotel and Casino in Lemoore. PFC has hosted a who’s who of top-tier free agent fighters, such as Razor Rob McCullough, John Alessio, James ‘Sandman’ Irvin, Ulysses Gomez, and even Legends’ alum Jorge Oliveira.

Horwich expects to make his PFC debut in February 2011.

Of course, no Matt Horwich fight would be complete without a new nickname, and indeed, the man of 1,000 monikers seems to have outdone himself in Oklahoma, reportedly declaring himself ‘The Multiverse-Surfing-Sabretoothed-River-Dolphin-Lion-of-God.’

“I had it on the back of my shirt when I walked into the ring. But the Lion of God part wasn’t on it . . . that would have been a lot of money for the printing. Especially if I had Limit Smasher in it too,” he explained deadpan.

The victory also continues Brady’s consecutive string of wins as a chief second. The bantamweight fighter first took the cornerman reins in August, at Combat Fight League, helping teammates Alan Jouban and Eugene Marenya win. In October, Brady supported Garren Smith in his return to the cage after a 10-month hiatus.

“It’s something special. Those certain moments that you experience with people. . . Most people don’t have any idea what that’s like. Right before someone’s about to go out in someone’s hometown and fight five five-minute rounds of combat. That’s a special moment for someone, whether they win or they lost. That’s the most emotional and important part.”

In other XFN action that night:

Special thanks to Dwayne Davis of the Urban Tulsa Weekly for assistance with the event results.