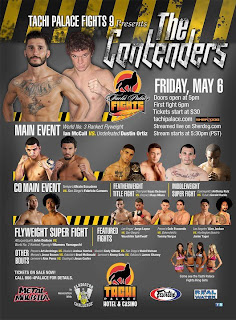 Alan is scheduled as the 6th out of 13 matches, so expect him to go on after 6pm PST.

Use this link to watch tonight's action: http://www.sherdog.com/events/TPF-9-The-Contenders-15487

At 4-2 and riding a two-fight win streak, Chidi Njokuani is Jouban's toughest fight to date. Both Njokuani brothers come from Muay Thai backgrounds, and much like Jouban, Chidi is a fast finisher. None of his six pro MMA fights have gone past the first round.

Live online streaming services are providing a great convenience and comfort for the users to watch any live coverage. It does not matter whether you are looking for an option to watch Olympic Games or Cricket world cup, you will be able to watch it lively online.