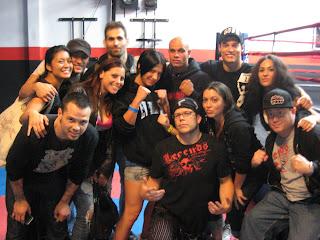 Although Legends didn’t come up with a straight of victories, they did turn over a pair of important wins at South Coast Martial Arts’ “Fight Night III” on May 30th, thanks to James Acosta and Alan “The Jedi Knight” Jouban, who won, respectively, by unanimous decision and third round TKO.

Also on the bill were Bruce Fulford, Ash Wagers, and Charlene Barretto, all of whom fought valiantly to decision with their respective opponents.

In an interview after the fight, Jouban commented “I was proud of everybody, man. F’real. I didn’t get to see everybody’s entire fight, because I was in the dressing room, trying to warm up and stuff. . . It was just fun. . . To get back in there, the atmosphere. To have your teammates with you. Just the whole thing was good. Everybody fought real hard. Everybody did real well.”

In Legends’ first match of the night, James Acosta beat Phiream Sok of Long Beach Muay Thai at 155 lbs by unanimous scores of 29-28. Acosta held court in the center of the ring for much of the match, keeping distance with low kicks and forcing Sok to circle in search of an opening. Acosta pushed the action to the ropes several times with flurries to the head, as well as three consecutive kicks that drove Sok to the corner.

For Acosta, the moral to the story was redemption, after dropping his previous match, his Muay thai debut in April, by unanimous decision. Having taken that match as a last-minute replacement, Acosta felt the lack of proper preparation time prevented him from performing at his peak. Since that time, Acosta has maintained a regular schedule of heavy training, with the single goal of erasing that blemish with a victory.

“I gassed out in the last fight. . . I had more time to prepare for this fight and I worked a lot on my conditioning. That was the main thing . . . This fight, I decided not to go in the clinch and not let the guy grab me, and move around more. Set up more combos and I put my head down. It worked.”

Legends’ next match featured Charlene Barretto against Adriana Savana of The Budoryu Center. Barretto, who had her first Muay Thai match last July, was hungry for a second win. However, Savana set the pace early with several forward-charging punch flurries, going on to take the match by unanimous decision with a score of 30-27.

“She was definitely just a really good fighter, and just strong. . . I was a little under weight, and it’s not an excuse, but felt like my power and endurance was [limited]. I was a little sick too. But it’s just one of those things [where] it wasn’t my night. It was her night,” said Barretto after the fight. 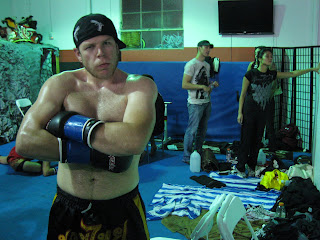 As one of two Legends’ fighters making their Muay Thai debuts, Ash Wagers squared off against Ryan Macabe of No Limits. Macabe took the match by unanimous decision by scores of 30-26 and 30-27.

Wagers worked to set the pace early in the match, moving swiftly and firing hard low kicks. But Macabe muted the offense with his noticeable size advantage, forcing the Legends’ fighter to circle wide and swing big in an attempt to overcome the distance. Macabe controlled the center for much of the match, but also went to the ground twice, once off a slip early in the first round and again in the third.

“He did a great job of keeping me at bay with his jab. He had a long reach. I couldn’t get inside to throw many combos, so I just went to my bread and butter,” explained Wagers. “The third round, when I cut-kicked him. . . I was real proud I pulled that off. I got that and put him on his booty.”

Despite the loss, Wagers’ debut marked the culmination of a long-traveled journey to dropping several weight classes. Originally tipping the scales at 235 lbs. in January, Wagers weighed in at 199.5.

“Between working and trying to get this off the ground, it’s really brutal. Coming into the gym every day, twice a day. . . I’ve come miles and miles from where I was. When I first started Muay Thai, I was 265. The diet is crucial, the training is crucial, and there’s no way around it,” Wagers commented after the fight. “I have a lot of fitness goals I’m trying to reach, strength-wise and conditioning-wise.”

Walking a similar path was teammate Bruce Fulford, who was forced to cut 18 lbs. to 160 after being unable to get a match at his more suitable 170 lbs.

“[Coach Jimmie Romero] was trying to get me a fight on the last bill. It didn’t happen, so I just was like ‘I’m going to take whatever chance I can get.’ But it was a lesson. . . I had, like, four pieces of sashimi in the last two days. . . I think I dropped too much. But I wouldn’t change it. I’m in agony right now, but I love it.”

Fulford faced John Quan of Sityodtong USA, coming up on the short end of a unanimous decision by a score of 30-27. Fulford and Quan were both on fire from the onset, as Fulford charged forward with combos into a clinch and knees, while Quan landed key kicks that also opened the door for knees. Fulford triggered several other attacks throughout the match, although Quan was able to push him back in the second round and place several kick combinations which likely made the difference in the judges’ eyes.

Early in the second round, Fulford landed a left hook that pushed Quan to the ropes: “When I had him against the ropes, I was like ‘I’ve got him. This is it. I’m gonna knock him out right now.’ I caught him with one or two good knees. I felt like I was gonna hurt him, but. . . He knew when I came in, when to throw push kicks. He knew how to move. . . It’s good fun, man. I enjoyed it.”

In the last Legends’ fight of the night, Alan Jouban beat Kelly Fishback of OC Muay Thai by third round TKO.


Alan Jouban, who works regularly as a catalog and runway model, was coming off a year-long layoff, after facing several injuries. Jouban was originally supposed to fight at a Tuff-N-Uff amateur MMA event in January in Las Vegas, but that was delayed after tearing cartilage in training. Finally, after Jouban was able to return to striking training in April, a slot opened up on the May South Coast Martial Arts show, and Jouban got his fight.

“My hand had been injured for seven months. . . I probably started striking again about a month [or] six weeks before the fight,” he commented.

Jockeying for position and knee exchanges in the first round, Jouban slipped on what was ruled a knockdown. He scored a decisive knockdown off a four-punch combo early in round two, and another off a low kick trip in round three, at which point the referee ended the match to give Jouban the TKO victory.

“I knew within the first 30 seconds that he was gonna be a game opponent. I could just tell. He had decent defense, decent striking. He wasn’t that new. Jimmie told me later on that he was on a five-fight win streak, which he didn’t tell me before. Which is probably good. I felt rusty . . so it took me into the second round before I really opened up.”