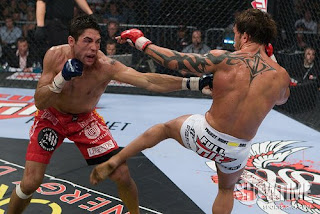 Legends MMA’s own Conor “The Hurricane” Heun and opponent Jorge Gurgel tore the house down with their crowd-pleasing, full-length slugfest at the ShoWare Center in Kent, WA, for the latest installment of “Strikeforce Challengers.” The event, which featured Smokin’ Joe Villasenor vs. Evangelista “Cyborg” Santos in the main event, was televised live on Showtime.

“I think the fight was an incredible fight. I think that they’re both some of the toughest guys on the planet,” commented coach and Legends owner Chris Reilly.

Both Heun and Gurgel fought a valiant and audience-approved battle which judges eventually awarded to Gurgel by unanimous scores of 29-28, 30-27, and 30-27. Gurgel did land low kicks and combinations throughout the match, but Heun’s push for engaging and overall damage was obvious.

“I felt like [Gurgel] threw more punches, but I think that Conor landed the more devastating punches. . . Very close fight. . . I felt like Conor was close to stopping him at a couple different points,” said teammate Chris Brady.

Numerous MMA websites lauded the match in their post-event reports. Five Ounces of Pain.com said “. . . without question the show stealer was the 160 pound match-up between Gurgel and Heun . . . Head kicks, flying fists and punishing leg kicks highlighted this bout that was in many ways reminiscent of the stand-up war waged between Forrest Griffin and Stephen Bonnar at the first TUF Finale.”

Sherdog.com described the match as “an absolute barnburner,” while MMAWeekly.com’s headline read ‘GURGEL AND HEUN HAVE STRIKEFEST AT STRIKEFORCE.’

The most common consensus about the match itself, which primarily was a stand-up war, was the irony that two men so known for their ground game would decide to keep the match on the feet. Gurgel himself was picked out for not putting his black belt-caliber jiu-jitsu skills to use, to which he asked Stephen Quadros “well, have you seen my fights before?” in his post-fight interview.

“He was expecting the shot and the takedown. I think that they made it very clear that they didn’t want to participate there with Conor. [Gurgel] had obviously worked very well on boxing. Retreat in circular fashion. . . I’d never seen any of that out of Gurgel before. Obviously credit to [Mark] Delagrotti. He’s an awesome coach. . . It would have been less effective had Conor been able to employ his wrestling. I think Gurgel would have spent less time on his feet and more time on his back,” reflected Reilly.

In the first round, both men felt each other out with combinations and dirty boxing from the collar tie-up. Heun stayed composed as Gurgel threw some low kicks that landed hard. At the three-minute mark, Gurgel threw a counter-combination and shoved Heun backwards, scooting him on his butt several feet. Heun came back and stalked him around the cage as Gurgel selectively threw leg kicks from afar. Despite sounding audibly stiff, Heun no-sold the kicks, countering with quick, crisp uppercuts and right body shots. Heun almost tripped Gurgel down with an ankle kick of his own, and then landed a solid body kick to Gurgel’s ribs as the round ended.

Heun came alive in the second round, landing jabs early and continuing with rights from the collar-tie up. Gurgel continued to evade around the cage, while Heun followed and landed several combinations. Gurgel landed a high kick, then two left hooks off a Heun combination. He followed that with more low kicks, but Heun stayed tough and replied with combos off the jab. Heun finally got Gurgel against the cage around the three minute mark, firing body shots, knees, and later a high kick of his own. Gurgel’s right eye was cut and bleeding by this point and it would appear completely shut between rounds. Gurgel landed left and right headshots, but with no seeming effect, as Heun pushed forward, unphased. Gurgel had an effective flurry just past the four minute mark, and then another at the end of the round. Fans cheered both fighters for their performances. 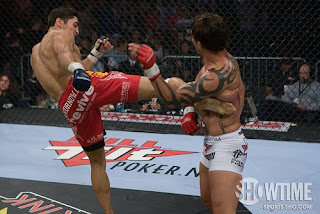 Gurgel opened round three with more low kicks, while Heun fired jabs and right straights. Gurgel continued to circle around while Heun tagged him with body shots and rights. Heun threw a spinning heel kick that, while missing, impressed the crowd. At the 1:40 mark, Heun caught a Gurgel body kick and knocked the jiu-jitsu artist down. Gurgel briefly reached for a leglock, and then scrambled back to his feet, choosing to not engage on the ground. Heun would catch two more kicks, capitalizing on the second of those by pushing Gurgel down and firing five right straights from above. Gurgel swept and got top control, but Heun immediately went to rubber guard before scrambling to his feet. Back up to standing, the two continued trading combinations and body kicks. With 10 seconds left in the match, Gurgel started doing jumping jacks, which Heun replied with a hook and Muay Thai clinch / knee.

To both fighters’ credit, fans gave a standing ovation after the bell.

“There was a lot of respect between camps. Delagrotti and I go way back. He was with me in Thailand in 2001, when I won the King’s Birthday. . . Anytime you have two guys who beat each other up like that, they’ve got a lot of respect for each other at the end. . . I think that’s what this sport is all about,” explained Reilly.

As if the ShoWare Center wasn’t rewarded enough with the match itself, Heun showcased his fan favorite class and style in his post-fight interview, commenting “there’s this thing called the universe, and if you put positive energy out there, positive energy comes back to you. It’s why I fight, because this is what I’m put here to do. I hope that everybody who watches me, that they can realize their own potential, and realize that if you believe in yourself, anything’s possible. Everybody knows that a mortal would have dropped right there. I’m flesh and blood just like everybody else. I just believe with all my heart that one day, I’m gonna be a champion. Whatever your goal is, if you follow it with all your heart, there’s no losers. Y’know, I’m going home a couple bucks short, and a little banged up, but I wouldn’t pass up these last 15 minutes for anything. It’s the most fun I’ve had ever.“