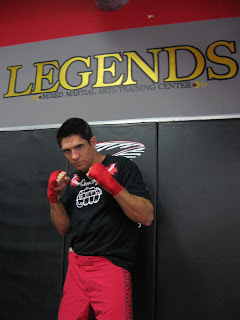 Just a heads-up that Legends MMA's own Conor "The Hurricane" Heun is slated to fight UFC veteran Jorge Gurgel on the next "Strikeforce Challengers" show, on June 19th, in Kent, WA. This event is going to be broadcast on Showtime at 11pm local time.

For details on the rest of the card, check out the lineup at Showtime's website: http://sports.sho.com/browse/events.html?sport=mma

IF YOU HAVE THE SHOWTIME EAST COAST TV FEED, YOU CAN WATCH CONOR'S FIGHT LIVE AT 8PM PST. OTHERWISE, IT WILL AIR AT 11PM THAT SAME NIGHT ON THE SHOWTIME WEST COAST FEED.

For those of you who don't know, Conor Heun former collegiate wrestler whose first fight dates back to May 2006. He's a veteran of the IFL and EliteXC / ShoXC, and has been featured on TV shows like "Human Weapon" (History Channel) and "Bully Beatdown" (MTV). Conor's riding high on a three-fight win-streak with plans to make it four.

But Conor's opponent, Jorge Gurgel, is no slouch. Jorge is a Brazilian Jiu-Jitsu black belt who trains with Rich Franklin. He was featured on the second season of "The Ultimate Fighter" and went on to fight seven times in the UFC.

For those of you in the Washington State area, tickets are available here: http://www.showarecenter.com/events/details/000000093/strikeforce_challengers

Legends MMA members, if you don't have Showtime and want to watch the fight, ask around at the gym and see who's organizing viewing parties (there's always a few). Or order Showtime from your local cable / satellite provider (and let 'em know you're doing it for Conor's match).
Posted by Legends MMA at 2:29 AM