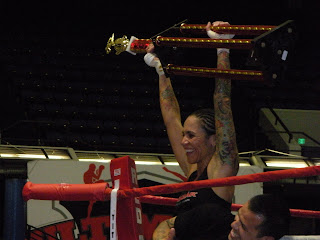 Seven years ago, Roxy Richardson could barely do a push-up. Fighting was the last thing on her mind. But this past weekend, the reinvented Legends fighter Roxy “Balboa” realized a milestone that was long in the making, emerging victorious in her pro Muay Thai debut. Based on scores of 49-46, 50-45, and 49-46, Richardson beat Sarah McCarthy (Bad Company, Leeds, UK) via unanimous decision at the 2009 Ultimate Warriors Muay Thai-Kickboxing World Championship, held at the Anaheim Convention Center.

“It feels great. The nerves were there, but mentally, I was strong. . . It’s been a long road. This’ll be my 13th sanctioned fight, my 20th or 21st fight total, including smokers,” Richardson reflected later that night.

“To be honest with you, there wasn’t a round that I was concerned about at all. . . She didn’t get winded, she wasn’t breathing heavy in the corners. . . She just let her hands go. . . Other than that, I was very, very impressed with her and very, very proud of her,” said Legends MMA team trainer Jimmie Romero after the match.

Richardson, a staple in the regional Muay Thai scene, was the International Amateur Muay Thai Federation (IAMTF) champion from 2008 and 2009.

“I was terrified of fighting, when I first started. Honestly, someone would ask me if I wanted to fight two months from now and I would get this horrible pain in the pit of my stomach, and just want to throw up. And now I am excited and I look forward to it. I think of it as a test of everything that I worked really hard for all the time. it was never like that in the beginning. I wasn’t a natural fighter, but I saw it as a challenge and it made me want to do better each time.”

Ironically enough, it was only recently that Richardson, whose connection with Legends MMA dates back to its days at the Bomb Squad, started working with Legends trainer Jimmie Romero. 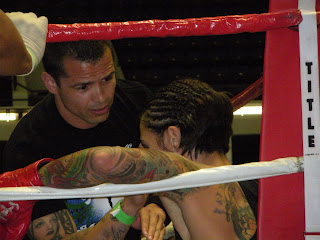 “When she came to me, last fight, I think I had her, like five weeks out within her fight. . . I just worked with what she had, and tweeked a little here and there, until I could get her after,” commented Romero.

But once they were past that match, the team went back to basics: “we broke her down, and built her right back up. . . I changed everything, and made it make sense with her footwork. I made it sync up to where every punch counts. . . Where it’s not just random shit being thrown. . . It flows, like water,” he added.

Of the partnership, Richardson was enthusiastic about going back to the drawing board: “this is the second time I’ve been working with [Romero], and we make a real good team. I’m learning some new things. It’s tough, because I’ve been fighting for awhile and he’s got to make adjustments for me, and that’s always been difficult. But I’ve trusted him and he’s brought me in a good direction. The results speak for themselves. I’m pretty happy with that, and I’m happy with how this training went.”

The story of the match itself largely spoke to the changes and improvements in Richardson’s arsenal and team, as Richardson consistently circled out of McCarthy’s charging line-of-fire, countering with jabs, right straights, steady combinations , and body kicks. McCarthy, who is known for controlling her matches by imposing her will, fought a chasing game, throwing low kicks to make contact.

“We used that jab to utilize space, because Roxy is a lot longer. . . And that’s why Roxy circled a lot, and she moved. Sarah likes to press and close in you, and make you feel claustrophobic. And the thing that stops that is ‘hey, you’ve got to follow me’. . . And while she’s eating punches at the
same time,” explained Romero.

The first round saw McCarthy utilize low kicks to breach the distance, while Richardson answered back with a body kick and a Superwoman punch. Richardson looked comfortable with her hands, landing a lot of punches to the face, especially at round’s end.

In round two, McCarthy kept with the combos and low kicks, while Richardson circled out and brought the action to the middle of the ring. Richardson fired a triple jab, checked a kick, and volleyed one back. She swung a kick and tried some elbows in the corner, but it was an overhand right that nailed McCarthy square in the face.

By the third round, McCarthy’s charge-and-attack M.O. was clear and constant. She pushed Richardson towards her corner, but Richardson clinched up and tried throwing elbows. McCarthy got in some jabs and an overhand right, but Richardson was on fire, ending the round with a flurry of punches standing and from the clinch. 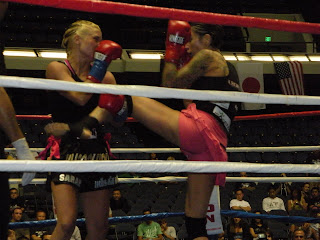 Perhaps sensing the need to turn on the steam, McCarthy quickly started round four in the middle of the ring, pushing Richardson into the corner. But Richardson circled her way out, firing an overhand right and body kick. McCarthy swiftly replied with her own attack. Clinching against the ropes, McCarthy tried for a trip, but couldn’t make it happen before the referee called for a clean break. Richardson landed another stiff combo to the face and attempted a spinning back elbow to end the round.

The fifth round opened with a brief clinch early on, but the two quickly broke apart, with McCarthy going after Richardson, who landed several kicks. McCarthy overextended on a punch, but Richardson didn’t capitalize. She did, however, land several body shots. The referee stopped the action to check McCarthy for blood, but the doctor allowed the match to continue.

By this point, the once intensely-silent crowd was vocally cheering both fighters. With ten
seconds left, Richardson went into overdrive and shot jabs and combos to end the match.

When asked her thoughts on the fight, Richardson said “I always have it in my mind that if I give two good rounds, then at least [it’s] a good show, but I felt I was on from the very first round. Which is unusual because I’m normally kind of a slow starter. So I was really happy that I was able to throw multiple things. And I felt like my timing was a lot better than I have been. I could hear both corners, which was cool. I actually would hear her corner, and then wait for her to do what her corner said . . .I’ve never been that clear before.”

Teammate Jordan Wright added “I really think she looked amazing . . . she was popping her jabs, rather than pushing. . .and her footwork was great too.”

Romero added “her next fight will be even better. We gave her a whole new set of tools to work with. And changed the arsenal up a little bit. And now that she’s actually used it in battle, she’s now more confident, like ‘yeah, I can use these new tools, and they work damn well.’”

Other Muay Thai action that night went as follows:

Richardson was cornered by Romero and Victor Henry, and sponsored for this fight by Revgear, Toe 2 Toe, Ed Hardy Watches, and United Front Productions.
Posted by Legends MMA at 4:07 PM