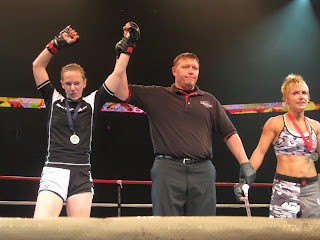 “She stuck to the game plan, and every time, after the first round, she put [her combinations] together better . . . She listened to her corner. She executed it, and I’m very, very proud of her.
Especially for her first MMA fight. Very proud of her,” commented trainer Jimmie Romero.

Prior to this, McGray spent the past three years in the world of Muay Thai, having first trained in 2006 and going 1-1 in North American amateur competition in that time. In 2008, she also attended a six-week training camp in Thailand, going on to win a full rules five-round match against a local fighter.

“I felt good coming out of it. I was happy . . . This one’s big. The one in Thailand was big. This one was big,” McGray said about her win.

With an estimated attendance of approximately 3,000 fans, the event was the second Tuff-N-Uff held in the larger Orleans Arena.

Lakoczky proved to be the aggressor early in the first round, pushing McGray backwards with jabs and front kicks. Trying to measure up her opponent, McGray backstepped and threw two-punch combos and several low kicks. McGray grabbed Lakoczky in a Muay Thai clinch and landed several knees, to which Lakoczky replied with body shots. Breaking apart, McGray found her stride, chasing after Lakoczky with single jabs and combinations for the rest of the round.

“When I got her in the clinch and I got some knee strikes and saw that she was winded, it really helped with my confidence. . . We broke the clinch . . . and she took a couple steps where she was slumped and tired. I was like ‘Awesome! That did exactly what it was supposed to do,’” McGray reflected. 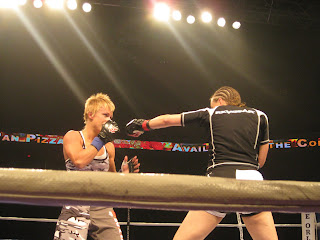 The stand-up trade would prove to be the theme of the rest of the fight, as McGray pushed the action with boxing combinations, while Lakoczky circled, looking for an opening that wasn’t appearing. Lakoczky came close to finishing, tripping McGray to the ground off a body kick and then sinking in a guillotine choke from the top. McGray kept her composure, however, eventually pushing Lakoczky away and escaping to her feet.

McGray remembered “I knew [getting to the ground] could happen, and I was ready for it, but once I got down there, it was just kinda like ‘oh wait, this is part of the fight too?’ I knew what I need to do, but then, actually doing it in the fight situation is different than training it and drilling it in practice. . .I was nervous at first, because her arm was pretty close to my neck, but she wasn’t really getting it in there all the way. I felt like if I just kept my chin tucked and worked out of it, then I wasn’t in too much danger.”

Romero noted “that’s what we worked at. [Assistant wrestling coach and Legends MMA fighter] Keenan Lewis worked with her on her wrestling. That was the whole plan. When you see that space, get out. Take it back up. And she did that.”

The Terminator chase continued into the third frame, as McGray hunted after Lakoczky with boxing combinations. Lakoczky tried to retaliate with body kicks. At one point, McGray had Lakoczky’s right arm trapped and briefly came close to securing a standing guillotine. Lakoczky landed an uppercut, while McGray returned the favor with low kicks.

In the end, all three judges award the match to Kate McGray. 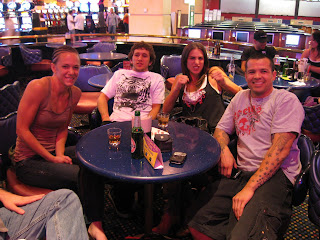 performance, McGray was very satisfied, commenting “I feel like I executed more. And I’ve never executed before. And that was really exciting. Especially with all the new things coming into play. With the little MMA gloves, the fans, and all that. So it’s just really exciting.”

The night marked another impressive milestone, as “Tuff Girls” became the first-ever all-women MMA show to be held in Las Vegas. The results of the other matches were as follows:

170 lbs. – Latoya Walker (Team XFC) and Brooke Guidry (Xtreme Couture) fought to a no contest after the doctor stopped the match after round one, due to a cut over Walker’s eye.

135 lbs. – Paige Zio (Gracie Fighter) defeated Kiley Martin (Team Girls) by TKO in round two after Martin’s team chooses not to continue due to a bloody nose.

125 lbs. – Ivana Coleman (Gladiator Academy) defeated Lauren Feldman (FFADC) by split decision. Many spoke of Coleman vs. Feldman as Match of the Night.

145 lbs. – In the main event, Moa Palmer (Team Oyama) defeated Patricia Vandermeer by TKO at 1:42 of round one.

McGray was sponsored by Toe 2 Toe, RevGear, and RoxyFit.