Legends Finishes the Year with Blood and Sweat, but No Tears 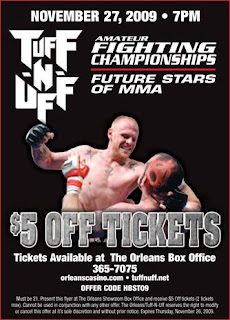 Legends MMA wrapped up their competitive team schedule over the weekend, sending up three fighters – Eddie Jackson, Chris Brady, and newcomer Tommy Gavin – to fight at the final Tuff-N-Uff amateur MMA event of the year. Gavin and Jackson both emerged victorious with crowd-pleasing first-round finishes, while Brady battled over three three-minute rounds to the short end of a close and debatable unanimous decision.

In the days after the fight, head trainer Chris Reilly commented “obviously, I’m really proud of the guys. Everybody fought their hearts out, and they always do.”

“Obviously, Tommy was as technically perfect as somebody can be, for their debut, on a big show like that. . . Eddie Jackson is Eddie Jackson. We always know he comes to fight. But I thought he looked [calmer] and [more] composed this fight than he has in the past, which is where we’re trying to go with him. . . Brady had a great fight. He was in there banging the whole time. Certainly not a performance that he should have any shame about.” 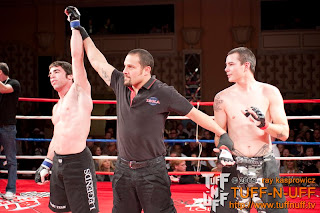 Gavin, the younger brother of pro fighter Steve Gavin, is one of the two recent additions to the Legends MMA amateur team. He was originally scheduled to face Alex Brooks of Hawaiian Fighting Arts, but Brooks was forced to pull out at the last minute due to injury.

In a match that was almost too short to report, after a very brief feeling out period, Gavin shot in for a takedown, took full mount, and slapped on an arm triangle. Isenor was asleep before the referee was able to stop the match at 0:46 seconds of the first round.

“I remember he was throwing fast kicks. I took him down and I transitioned right into the arm triangle,” said Gavin, whose thoughts on the match were as brief as the match itself.

Apparently, Gavin channeled the spirit of Babe Ruth and his famous “called shot,” as the young lightweight decided backstage exactly how he’d finish the match.

According to Reilly, “right before he actually went to fight, he goes ‘I’m gonna take this guy down quick, and choke him out.’ I was like ‘well, that’s the game plan.’ And he did it.” 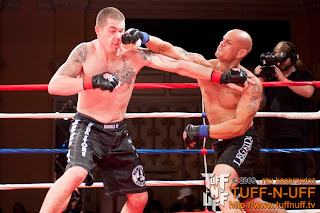 Jackson, known for his heavy hands and don’t-blink TKO finishes, faced one of his toughest challenges in Bowler, who was riding back-to-back submission wins.

After an awkward front kick from Bowler, Jackson charged in and clinched up in the corner. Bowler was able to tie up with double underhooks, but Jackson countered with Muay Thai knees and right punches to break them apart. He chased after Bowler to the other side of the ring and dropped him to his butt with a right hook that many thought would end the match. But Bowler was able to recover, clinching up against the ropes. Bowler tried grounding Jackson with a side headlock takedown, but Jackson slipped out from behind, following up shortly thereafter with a left hook that proved to be the beginning to the end. Jackson complemented the shot with ground and pound until the referee stopped the match.

Fully aware that Bowler’s headlock takedown / neck crank was his signature submission, Jackson worked extensively with teammate Bryan Brown, a 13-year wrestling veteran, to avoid the scenario. When he found himself in Bowler’s clutch, Jackson said “I panicked a little bit, because that’s how he caught everybody, with that same fuckin’ headlock. . . I knew what to do, and I did exactly what I had to do. I snuck out the back door.”

Post-fight, Brown was beaming, saying “I was so proud. It went exactly like we thought it would. He did everything that he said he was going to do, and it just worked out perfectly . . . His takedown defense was much improved since the last time I saw him fight. . . And I just knew Eddie’s striking was on a whole other level.”

135 lbs. – Chris Brady (Legends MMA) vs. Gor Mnatsakanyan (Filipino MMA)
Brady’s prior two outings, both with Xtreme Couture’s Jimmy Jones, ended in misfortune and controversy. During that same time, Mnatsakanyan notched up a pair of unanimous decision wins, each time surprising fans and commentators who debated the verdicts. With those ingredients, this match was sure to provide a fresh and engaging challenge for each combatant. 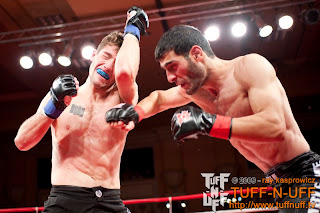 After a brief trade in the first round, Mnatsakanyan set the pace by circling the perimeter of the ring, stick-and-moving with high-kick and side-kick combinations, while Brady stalked him from the center. Brady tagged Mnatsakanyan with an overhand right before getting taken down. However, Brady held his knees up to prevent Mnatsakanyan from fully passing guard. Mnatsakanyan later knocked Brady down with a three-punch combo, punctuated with a high left kick, just before the end of the round. The second round saw more circling and stalking, respectively, and another trip takedown with Mnatsakanyan on top. Brady reversed and dropped punches briefly, but then let up. Brady stayed competitive, landing counterstrike combinations. He went into overdrive in round three, throwing a flying knee and employing a Thai clinch at separate times. Both men exchanged spinning backhands at one point. Brady scored a takedown, but let Mnatsakanyan, who by then was visibly winded, up to his feet. They were against the ropes exchanging body shots as the final round ended.

“It always sucks to lose,” said Brady matter-of-factly. “I was trying to stay tight with my defense, because I knew he was gonna be throwing some crazy shit like that. Put pressure on him, and try to outwork him there. I don’t know. I felt like I was landing hard punches. I didn’t kick nearly as much in this fight. I think I probably should have kicked a little more,” said Brady in retrospect.

Of his protégé’s performance, Reilly said “I think he just let himself get slightly outworked by a guy that was throwing a lot of stuff. Nothing was really all that accurate. [Mnatsakanyan] didn’t really hit him that hard. . . It was hard, coming off the disappointment in the last fight [in August, against Jones] . . . I think that’s why he probably has a hard time getting fully back up for this fight. So obviously I’d like to see a rematch there. I think that’s a fight Brady wins more often than he loses it. I know he’s probably disappointed, but it was probably a good learning experience for him.”

Nevertheless, Reilly is confident that his young star will bounce back: “Brady’s a veteran at this point. He’s got over 13 Muay Thai fights and nine MMA fights, so he’s seen both sides of wins and losses in fights. And he’s in it for life. This is his career. It’s always tough to take a loss. If it’s not, you’re not in the right sport.”

Although there was no vocal debate over the decision, several people believed Brady won the fight. Teammate Brown noted “I seriously thought that even though the dude was throwing flashy shit, I thought it looked better than it was in it’s effectiveness. I thought that all of Brady’s countershots and his really clean striking did more damage. And so, even though the guy might have outstruck him in the first round, I actually really thought Brady won the second and the third round.”

Despite the decision, Brady’s spirits stayed high in the aftermath. “It’s cool to go up there and fight and be around all the famous legends. Last time. . . after fighting Jimmy Jones, Randy Couture said ‘great fight, kid.’ Gave me daps. And this time, after that fight, Wanderlei Silva was in the crowd, was looking at me and he looked at me and he pointed at me and he put his hand over his chest, like ‘you got heart.’ And I was like ‘word!’ . . . It’s confirmation that I’m not doing this for nothing.”

Two other fighters, Takashi Munoz and Christian Palencia, were also scheduled to compete, but injuries in the last two weeks of training sidelined them from getting in one last fight for the year.
“It was sad not to get a couple of the other guys on, because they were really well prepared too . . . both pretty heavy-duty injuries, especially a week before a fight. Not something that anybody could have fought through,” said Reilly.

But the team is optimistic for their prospects for 2010. The October opening of Legends’ new location has brought about a hungry new squad of aspiring fighters, many of whom will likely debut next year. Leading the pack are middleweights Bryan Brown and Ryan Lupkes, while teammates like Jacob Martel, Benjamin Sample, Lila Smadja, Bex Fouquet, and Dawna Gonzales look to represent Legends for the first time. Likewise, Munoz, Palencia, and Strikeforce lightweight Conor “The Hurricane” Heun will set out to put injuries behind them and return to their winning ways.

“I think these guys are in great shape, and I think there’s been a huge added benefit to coming into this new facility. We have a lot more space. We have a lot more areas for guys to train. It’s attracting a lot of the big-name pros back. . . So it’s a constant state of evolution, and all we can keep doing is keep working and keep trying to improve and keep trying to bring in fresh talent. I think we’re all getting to where we’re trying to go,” commented Reilly.

Brady added, “everybody knows that if you’re fighting the guys from Legends, it’s gonna be a helluva fight. I feel like the promoters and the people of Las Vegas, and the fighters themselves knows that Chris Brady, Eddie Jackson, Takashi Munoz, Chris Reilly, Conor Heun and those guys – we come and we fuckin’ bring it. Every fuckin’ time.”

Tuff-N-Uff Amateur Fighting Championships returns to the Orleans Hotel & Casino on Saturday, January 8th, 2010. Go to www.TuffNUff.net or www.OrleansCasino.com for details on buying tickets and reserving rooms, and check back here for details on Legends’ next fights.
Posted by Legends MMA at 1:49 PM