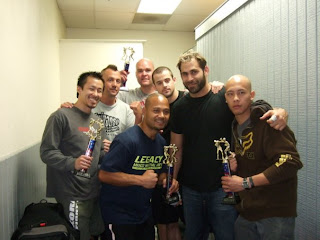 Longtime Legends MMA members Dustin Mueller, Mike Orlandella, and Lawrence Tsang all crossed the “Throwdown Threshold” last month, competing in an amateur Pankration event. To boot, all three did so in victorious fashion, with Mueller and Tsang winning by unanimous decision, while Orlandella secured a kimura armbar for a second round submission.

“All three have been with me for a long time,” said Legends trainer Amir Rahnavardi, who has coached the trio since their first classes at Legends.

Tsang, wrestled in high school, found his pre-fight techniques as a fundamental key to getting the upper hand before even stepping into the ring.

“Lawrence is cool as steel. You could tell he’s competed his whole life. The other coach . . . comes up to me, he said ‘dude, there’s something up with that guy, bro. He’s way too relaxed’. . . He’s smiling and having a good time and walking around. Like you’d never think this guy is gonna fight right now and it’s his first fight,” explained Rahnavardi.

“I just remembered from wrestling [that] the key was to stay calm. Because that’s the biggest mistake, is if you get all worked up, get your adrenaline pumping, when you get into the ring, you’re already warn out. You get tired out already. I tried to stay as calm as possible. . . I was also trying to intimidate, just by acting. . . That’s part of the fight, right? Just intimidate the other person, then you won’t have to fight, right?” said Tsang.

Tsang’s wrestling came into play during the bout as well: “Lawrence just basically controlled the guy. Beat him up a little bit on the stand-up, and then grabbed him and took him down, and would just control him. And he’s just a beast like that. His base is phenomenal.”

Tsang remembered, “he kicked me twice on my leg, and then after that, I just started kicking him as far as I could. Just to make him think twice about kicking me. . . And then, after awhile, I could feel my legs slowing down a little, so I used my wrestling to take him down, because I didn’t want to lose that advantage [that] I knew I had. . .Most of the match was pretty much me in his guard, hitting him in the stomach.” 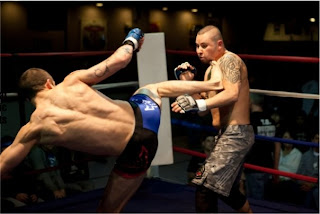 Orlandella and his opponent, identified as “Nadir,” circled and traded cautious but powerful kicks during the first round. In round two, business quickly picked up, as the two exchanged kicks almost immediately. As Nadir charged in with a combination, Orlandella reached for a takedown and took it to the ground, quickly securing side mount. Nadir muted Orlandella’s offense with half-guard, but the Legends’ fighter peppered him with body shots before sinking in a kimura on the left arm, rolling through and wrenching hard for a quick tapout.

“Michael is a Kung Fu guy. He’s got a Kung Fu background. . . I used to call him Karate Mike,” explained Rahnavardi. “So before the fight, I go ‘dude, I want you to Kung Fu out, bro. All your weapons? Use, ‘em, dude.’ And sure enough, he Kung Fu’ed out, dude. . .He does these crazy-ass side kicks, and weird whip kicks. And he was landing all that shit. He was phenomenal.” 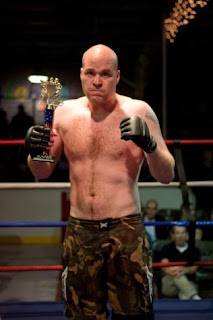 The last Legends rep of the night was Dustin Mueller, whom Rahnavardi anointed Legends’ “Biggest Loser,” referring to his athletic makeover. Trimming down from a chubby 230 lbs. when he first joined the gym, Mueller fought at light heavyweight (205 lbs), facing a significant weight and experience advantage.

Although video of Mueller’s match was unavailable as of press time, Rahnavardi offered his own brand of play-by-play with this account:

“So, dude, he gets this fight. And he’s fighting a guy that’s bigger than him. And I’d seen the guy fight at the last fight. The guy wears a green wrestling singlet, and he’s tough. . . Dustin’s had zero fights and this guy’s had two or three fights. . . And I tell Dustin, I’m like ‘just go do your thing. Have fun’. . . And dude, he comes out, and he fuckin’ beats this guy up, dude. Boom, kick. Boom, turning his hip over completely. These long-ass legs just whipping. Dude, to the point where this guy was just panicked, bro . . . First two rounds, [Dustin] beats the crap out of him. Third round, got taken down, but the guy couldn’t do anything to him. Control, control. Won unanimous decision, dude. I’m tellin’ ya, as a coach, it was one of the most, like, gratifying moments of my whole career.”

“I was totally not ready to fight, at that time,” Mueller recalled. “Because I was just getting in the middle of getting my hands wrapped. I [only] had my right hand wrapped, and then I hear my name announced and I freaked out. . . They said ‘Dustin, you got two minutes to get to the ring.’ It was crazy. I wasn’t even warmed up. . . I had to run back to the locker room to get my mouthpiece, and then my gloves. When I got to the ring and it started, I just wanted to chop this dude’s legs off. . . That was my game plan, really. Leg kicks.”

Of his work with Rahnavardi, Mueller said “I owe him a lot of credit for my victory, and my future victories too. He’s the one who’s trained me, my whole time here at Legends . . . when I got to Legends, I was like 230 lbs., and I was this fatass. I owe a lot to Amir, man.”