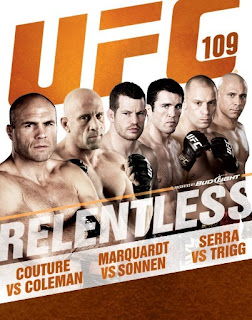 Our first “Pole Show LA” may now be a thing of the past, but the party doesn’t stop there. Come out and join us next weekend for two great events:

On Saturday, February 6th, Legends MMA and Ecco Hollywood returns with FIGHT CLUB, our monthly PPV viewing party, to watch UFC 109: RELENTLESS. This event features two legends of MMA, Randy “The Natural” Couture, and Mark “The Hammer” Coleman do battle in a rematch from their world-class wrestling days. On the undercard, two of the sport’s greatest talkers, Frank “Twinkle Toes” Trigg and Matt “The Terra” Serra, will let their hands do the talking, while Nate “The Great” Marquardt and Chael Sonnen face off for the opportunity to attempt to dethrone Anderson Silva from his UFC middleweight kingdom.

Drink specials will be in effect, and valet parking is available (and free if you drive a hybrid).

Showtime starts at 7pm, although prelim fights will be airing on Spike TV at 6:00pm. 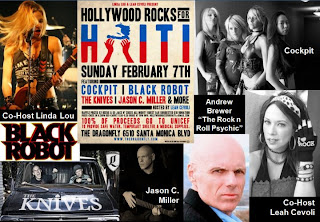 The next night, right after the SuperBowl, rock out for a timely, good cause at the Dragonfly in Hollywood, where Legends member Le’Von Webb and his band The Knives take the stage for “Hollywood Rocks for Haiti,” a benefit concert and auction to raise money for UNICEF’s relief efforts in Haiti.

Legends MMA is also donating memberships and equipment for their auction.

Below is the official press release for “Hollywood Rocks for Haiti.”:

Hollywood – Hollywood Rocks For Haiti, a benefit concert to help support relief efforts in Haiti, will take place Sunday, February 7 at The Dragonfly in Hollywood. Organized by Cockpit’s Linda Lou and actress Leah Cevoli, the event’s proceeds will be donated to UNICEF for their relief efforts for children affected by the recent earthquake in Haiti. In addition to a heavy line up of Los Angeles area bands, there will be dance performances, psychic readings, special guest DJs and raffle prizes.

"An event like Hollywood Rocks for Haiti gives everyone the opportunity to do their part, even if it's the simple act of attending a benefit,” said Linda Lou. “Another fun night out for us is hope for someone else's tomorrow."

Live musical performances will include sets from Cockpit, The Knives, Godhead’s Jason Charles Miller and Black Robot. Attendees will also be treated to a special dance performance from Fire Groove, a guest appearance from Snake Sabo of Skid Row and psychic readings from the rock 'n’ roll psychic Andrew Brewer. DJs Eric Ill and Metall Will will spin the tunes and Leah Cevoli will emcee the event.

Hollywood Rocks For Haiti will take place on February 7, Super Bowl Sunday (after the Game!!), with $2 Beers and $5 Jack 'n Cokes all night!

For more information or to make a donation, please visit www.HollywoodRocksForHaiti.com

Tickets can be purchased at the door or online at: www.SaveFans.com
(type in Hollywood Rocks For Haiti).

Hope to see you at next weekend!
Posted by Legends MMA at 5:53 PM