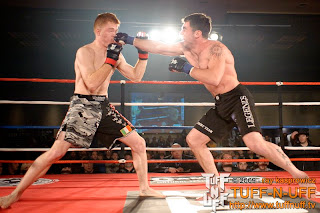 It wasn’t the 2010 kickoff that he wanted, but Legends’ resident lightweight Tommy Gavin fought the good fight this past weekend, facing Jake Swinney (Xtreme Couture) at “Fight Night III,” presented by MTX Audio and Tuff-N-Uff, at the Riviera Hotel & Casino in Las Vegas. Swinney caught Gavin in an armbar at 1:31 of the first round, winning (as listed) by TKO.

Gavin, always a man of few words, simply said “I’m disappointed. I made a mistake. Can’t wait to get back out there, fight again, and redeem myself.”

According to his teammates and cornermen, Gavin started things off early, connecting with a right cross and scoring the takedown. However, Swinney was able to catch Gavin’s arm and transition to an armbar. After trying to wrest out of the predicament, Gavin was forced to tap before any real damage was done.

“I was too worried about rushing and finishing the fight. I left my arm out when I was trying to brace off him. He took it. I made a mistake and he capitalized and took the armbar. I had to tap,” he lamented.

“He was looking good, ‘til he got caught. He fought it for awhile, like 15 seconds,” said teammate Eddie Jackson.

In classic “no excuses” form, Gavin was back to the drawing board on Monday, training for the next call to fight. “Everyone rebounds from a loss. That’s it. Just – no excuses. Next time, just go out and take care of business.”

Tuff-N-Uff returns to their residence, the Orleans Hotel & Casino, on February 26th. Legends anticipates sending several fighters, including Gavin, to that event. Ticket and hotel reservation details will be posted shortly here and at www.TuffNUff.net and www.OrleansCasino.com.

Tommy Gavin was sponsored for this fight by X-Pole and Proformance Sports Training.