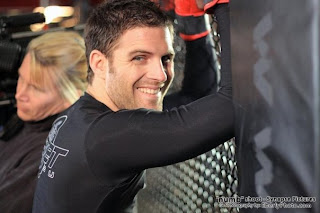 10th Planet instructor / brown belt Scottie “Einstein” Epstein will be Chuck Liddell’s assistant coach on the next season of “The Ultimate Fighter,” which will debut on March 31st and run through June.

“This is a great opportunity. . . It makes 10th Planet Jiu-Jitsu go to a whole other level of respect. It legitimizes it more and more,” said Epstein.

Season 11 of “TUF” begins shooting this month, and will feature 16 middleweight fighters competing for the traditional “Ultimate Fighter” three-year contract. This will be Liddell’s second tour of coaching duty, as it will be for his opponent, Tito Ortiz. Liddell coached the inaugural season of the show in 2006, against Randy Couture, while Ortiz coached season three, against Ken Shamrock.

“This show is a show that I watch. . . ‘Dexter’ and ‘The Ultimate Fighter’ are the only shows that I’ll watch every fuckin’ episode. So I get to be a part of that. So that’s exciting for me. What really will be exciting is, hopefully, guys that I’m teaching use the shit that I’m teaching. . . It excites me to corner, it excites me to fuckin’ get paid for it, and to get recognition for it.”

This won’t be Epstein’s first exposure on national cable TV, as he previously was featured on an episode of “TapouT” two years ago, in connection with his 2007 match against Sergio Quinones. This time, however, “Einstein” is all too happy to defer the limelight to Liddell and the 16 competitors, explaining “[with] the TapouT show, there was pressure on me. There’s no pressure on this. . . So this is a lot more fun for me, and I get to fuck around a lot more . . . live my life and not really worry.”

Although the announcement that Liddell and Ortiz would coach season 11 and subsequently face each other in a third match was met by many MMA fans with anti-climactic disappointment, Epstein is one of the vocal enthusiasts for the match, believing that this will be the opportunity for Liddell to reinvent himself as a ground specialist.

“I’m training him 3-4 days a week. He flies down to train with me. That makes me feel good about myself. That that guy trusts me that much. . . Which is why I want him to submit Tito immediately. I want Tito to be taking him down, he sprawls . . . smash, choke him the fuck out. That’ll be his first submission ever in his professional [fight career].”

This will be the second 10th Planet / Legends MMA member to coach on “The Ultimate Fighter,” as Chris Reilly served as striking coach for Team Rampage on season seven (Quinton Jackson vs. Forrest Griffin).

Best of luck to Einstein and Team Liddell.