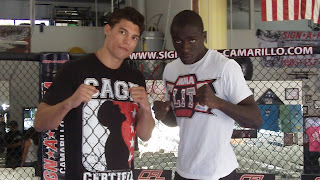 In the main event, Jouban was put in the invader’s role, as he faced West Coast Jiu Jitsu’s star Mose Aieti, who has made waves this year in the SoCal amateur MMA scene. However, Jouban proved to have answers for the hometown hero’s questions, winning by unanimous decision. As the winner of what was declared the Match of the Night, Jouban was awarded a Polanti luxury watch.

“Tough dude. Good fight. It was a fight that I wanted, too. Because I’d been saying I don’t want a quick finish or anything. I want a war. . . I haven’t been out of the first round in my last three fights. So to get to go to a three-round decision, and to kick a guy in the head and have him come back wanting more, it was good,” commented Jouban after the fight.

Marenya, who fought at a 160 lb. catchweight in transition to welterweight, was particularly anxious to get in the cage. He was originally scheduled to fight Anthony Olivas of Bloodbank MMA the week prior, and, ironically, was the main event on that show. However, when rowdy and drunk fans in the crowd started their own fight during the match before Marenya’s, El Monte police and CAMO officials were forced to immediately shut the show down, leaving he and Olivas frustrated and unfulfilled.

“I was pissed off last week. And all that built up into this week, and I put it out there in the ring. I did my thang. Did what my coaches told me, and I banged,” said the North Carolina native. 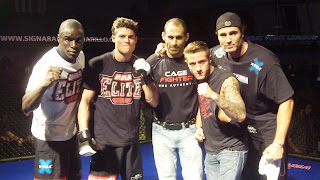 Also worthy of note about ‘Ground Zero’ was teammate Chris Brady, taking the cornerman reins for the night, covering for head trainer Chris Reilly. Along with Amir Rahnavardi and 10th Planet brown belt Victor Webster, ‘Boulevard Brady’ was chief second for both Marenya and Jouban. With two successful fights, Brady was praised for his leadership, which, not surprisingly, resembled his longtime mentor’s.

“Brady is like a Little Reilly,” noted Marenya. “He really knows his stuff. He knows the advice to give you. Watches the fight really well. Amir is just a great guy. Great coach. One of the most experienced guys we got. I could hear Vic [Webster] advising. So I basically had all three in my corner, and I really appreciated all of them.”

Jouban noted that having Legends’ more experienced fighters corner their teammates not only helps them grow, but also brings the team itself closer together: “I think not only for me, but for my teammates, I think that it builds their confidence as well. In bringing fighters to fights, [cornering] them, warming them up. That way, we can work together as a team, like an actual cohesive unit. Where, if Reilly can’t make it, I could corner my buddy. I can warm them up. We know that we can all rely on each other.” 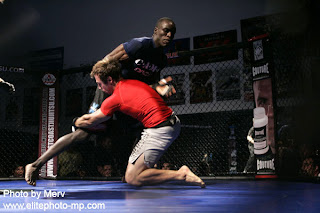 Aven spent a good part of the first round working for a takedown, crowding Marenya against the cage and trying a trip, but Marenya fended it off incredibly well, sprawling and stuffing the double-leg shot, quickly escaping when they did finally get to the ground. Marenya opened up with lefts and rights, and then fended off another shot with overhooks and knees. Aven charged and did get Marenya on the ground, peppering him with lefts and taking his back, but Marenya pivoted around and was stacking Aven from above as Aven worked for an armbar as the round ended. Aven was determined to get the takedown in round two, trying to pull in Marenya’s legs against the cage for well over half the round. After breaking apart, Marenya landed a high kick that rocked Aven, who instinctively changed levels and grabbed for a single-leg, which he did score as the round ended. Marenya came alive in the third round, opening with a a low right kic and attacking with lefts and rights to the head, pushing Aven back against the cage until referee Ray Rothfelder stopped the match. Marenya was awarded the victory via TKO.

Marenya’s growth as a fighter, from his first West Coast match back in April, was markedly obvious, not just in his takedown defense, but, according to Jouban, his punches and kicks: “I think Eugene’s striking is really starting to come along. You could see the progression in his last three fights, leading up to this. It really showed because he landed the head kick. . . The guy wore himself trying to take him down. But the striking was the difference-maker. The guy didn’t want any part of the striking, but he had no choice. Eugene had the more dominant reach, and just athleticism.” 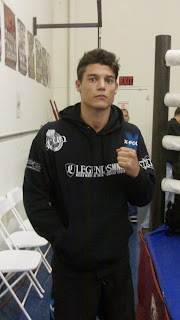 Aieti was active on the attack, taking Jouban down off a combo and working from inside Jouban’s guard. Jouban muted Aieti’s options by pulling mission control. Aieti tried a short slam to no avail. Once referee Ray Rothfelder stood them up, Jouban landed several Muay Thai knees, kicks, and punches to end the round. Both men were more cautious in engaging in round two, throwing selective kicks before Aieti charged in. But Jouban caught him with two more Muay Thai knees before being taken to the ground, where Aieti kept the fight. In round three, Aieti shot in for a takedown that Jouban caught with a front headlock, slipping in an underhook and several strong knees. Jouban let go and tagged Aieti with a right kick, then charged in with kicks and punches. Aieti dropped Jouban with an overhand right and pounced, but Jouban caught him in a triangle choke that he held to round’s end.

Marenya had nothing but praise for the always-poised Jouban, commenting “aw, man. Superman! Great fight. . . He outworked the kid. . . I guess people now know not to stand-up with Legends guys. ‘Cuz Chris Reilly, Muay Thai. It’s just showing how great our stand-up reputation is. No one wants to stand with us.”

In other “Combat Fight League: Ground Zero” action that night: