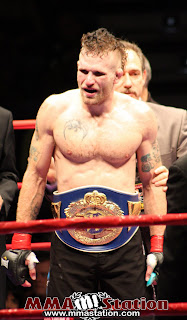 Legends MMA’s resident middleweight metaphysician, Matt ‘The Limit Smasher’ Horwich simultaneously reversed his own polarity and recorded a new milestone for the gym this past weekend, submitting former UFC title contender Thales Leites to become the first Powerhouse World Promotions (PWP) middleweight champion. The event took place on Saturday the 14th, at PWP’s “War on the Mainland” pay-per-view event at the Bren Events Center in Irvine.

“It’s a beautiful universe. Thank God for good friends and good victories,” said the newly-crowned champ in the days after the fight.

“I just think it puts him on a whole other level, if he can keep it up. Thales has never been submitted. It’s a huge victory,“ added his wife Kelly.

Ironically, Horwich was a last-minute replacement for Hawaiian fighter Falaniko Vitale, who withdrew from the event in early August. Anxious to shake off the taint of two recent debatable decision losses to hometown heroes, Jason ‘The Athlete’ MacDonald in Canada and Tom ‘Kong’ Watson in the U.K., respectively, Horwich jumped at the chance to fight in his own backyard.

Moreover, the fact that he didn’t need to board an airplane sat just fine with him. .

“It’s funny, because I like skydiving, but I hate flying. . . God’s well aware I’d rather die any way besides flying, because I mention it to him thousands of times every time I have to fly on an airplane to fight,” he lamented, adding “props to Thales. It’s hard to come to someone’s hometown and fight him. This is where my friends and family are. Where I train, and where I’m comfortable and have everything I want.”

The match itself was largely a back-and-forth ground battle, with Leites taking Horwich down, where both would trade sweeps and transitions for top position until one would escape to his feet. Standing, Horwich pushed the action, stalking Leites with jabs and low kicks, though Leites also had several sweeping low kicks that tripped Horwich on his rear. 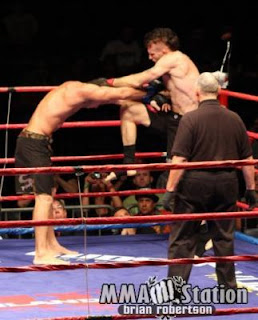 “I had the reach on him. I was trying to throw the jab, and work a smart game plan. Tie him up and tire him out,” explained Horwich. “I was getting knocked over with that beautiful leg kick that he was doing to the back leg. I wasn’t really hurt from it. I was just looking dumb. I was like ‘alright Horwich, you’re laying down on the job. Get up, stupid!’”

According to head trainer Chris Reilly, beating Leites at the cardio game was a key strategy in the match: “As each minute passed, I saw [Horwich] get stronger and Thales weaken. By the end of the second, I was getting pretty confident. Event after losing the third. I felt good going into the fourth, and it didn’t take long from there,” he said.

The second round was Horwich’s, successfully muting Leites top position offense early, and then coming back with a leglock attempt and strong ground-and-pound in the last minute. Leites decisively took the third round with a threatening side choke that he held on Horwich for almost a minute. However, in Reilly’s eyes, surviving that position was in fact the tipping point which swung momentum back in favor of the Legends team.

“The arm triangle was [Leites’] best move. . . When Thales got it locked in, I knew he was going to gas trying to finish it. As soon as Matt came out, I knew the fight would shift our way.”

Horwich noted “I worked with my good friends at 10th Planet on how I should defend the side choke, just in case. It’s a good thing we worked on it. I wasn’t gonna tap. I was worried . . . it was like ‘alright, relax. Don’t panic. Do the correct defense. Count to 60’.” 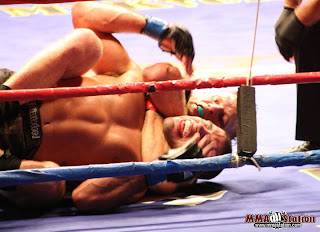 Indeed, the energy Leites burned on that choke compromised him for the fourth round, where Horwich scored an easy takedown and cinched in a rear naked choke to end the match, and win his third MMA championship, at 0:44.

“I felt he was getting tired. . . I’ve been working a lot with Eddie on how to finish it better, squeezing my own leg. Working on squeezing the choke muscles. And then it went under his chin and then I knew it was in. And I was like ‘thank God.’ Then I was going to hold on until the referee pulls me off, because I’ve seen a lot of fights where the guy taps and the ref doesn’t see it,” explained Horwich.

For almost any victorious fighter, once his hand is raised, he realizes that journey is the destination. The hard work, training, sacrifice, and discipline all gain mass and resonance, embodied in the win. According to Horwich, it was his spiritual faith that powered that journey, and as such, it was his faith that defined his victory.

“The thing is my faith felt better than any fight. I didn’t really have any anxiety or anything. I felt fired up, but not anxious. . . So I was feeling that. Even when the fight got tough, my faith felt good, when I was caught in the side choke. So I think that was a big difference in this fight. . . Like Proverbs teaches us, those who work hard will be leaders and those who are lazy will be slaves. Those who work hard are likely to get what they want in life. Faith is the most important, but you just can’t expect God to do everything for you. You gotta put in the hard work,” said Horwich.

“It was an honor to fight Thales. He was really respectful, even afterwards. We saw him when we were leaving and he had the most respect for Matt,” commented Kelly.

Links to Horwich vs. Leites from “War on the Mainland” are here:

In other “War on the Mainland” action that night:

PWP has not yet announced a date for their next event. Matt Horwich is sponsored by X-Pole and Melee Fight Gear, with support from Legends MMA and 10th Planet Jiu Jitsu.