He might not be old enough to drink, but Jacob Rockymore is old enough to put heads to bed, as he demonstrated on July 30th at Spar Star MMA’s inaugural event at the El Monte Civic Center in El Monte.

Rockymore, making his California MMA debut, defeated Cole Riley of OC Boxing with a arm triangle choke (aka side choke) at 1:31 of the first round.

“That shit was tight. . . I went in there, had fun, did my thing, and the results came out good. If you see the video, I was focused,” he said proudly in the days after the fight.

The match started out swiftly, as Rockymore attacked with combos and Riley replied with sharp jabs. Rockymore pressed the action with a pair of kicks and an overhand right, which eventually led to grabbing a waistlock and working for a takedown. He did eventually trip Riley to the mat and bully him over, then throwing rights from inside Riley’s guard. Riley swept Rockymore, who swept Riley almost as quickly, before landing in a side choke that he cinched until referee Larry Landless stopped the match.

For Rockymore, this match was not just about the immediate victory, but also about moving past his previous bout and proving to himself that he could perform at the level for which he’s trained. This past May, Rockymore fought in Las Vegas, first coming up on the short end of a hairline-thin split decision and then struggling through sickness backstage. However, in El Monte, the young flyweight was determined to claim his reversal of fortune. 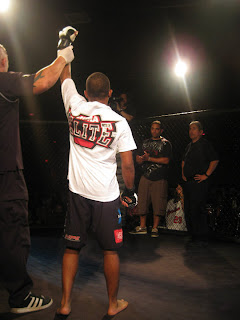 “I felt more confident. Because I knew I was going to win this fight, for some reason. The last one was tough as fuck. Harder than I expected it to be. This one, the guy was overweight, and I was under. . . When I was inside the cage, I was just ready. My mind was set and everything. I knew what I was gonna do.”

Despite such a dominant and adept performance, Rockymore is still quick to recognize that he’s got a long way to go, saying “I still feel like I can do better. I’ve still got a lot to learn. . . [like] the jiu-jitsu on the bottom. After he flipped me, I was like ‘fuck, what do I do now?’ I just tried to strengthen over. Get my butterfly guard and flip him. That worked, but what if it didn’t?”

Teammate Eugene Marenya was also scheduled to fight on the Spar Star event, and was in fact the last match of the night, but in an unfortunate turn of events, the show was cut short when several drunk fans ignited their own brawl in the stands, just one match before Marenya’s.

Fortunately, Marenya didn’t need wait long before finding another match. The next day, he was added to Combat Fight League’s “Ground Zero” event in Oxnard, taking on Marcus Aven of Right Cross.