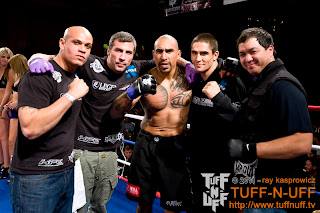 Legends MMA got off to a respectable start in 2011, with flyweight Jacob Rockymore and light heavyweight Gio Zavala both making their Tuff-N-Uff debuts on January 7th at the Orleans Hotel & Casino in Las Vegas.

After a series of false-starts in 2010, Zavala marked his first MMA match definitively, with a first-round KO victory. Rockymore, facing yet another larger opponent, came up short on a unanimous decision, though by all accounts, he fared well in the striking department.

“I feel like I should have went the opposite of what I was trying to do. . . I was trying to clinch with him and take him down. But I didn’t know he was that much bigger than me. He was probably like 20 more pounds than me,” Rockymore said in reflection.

According to teammate (and Tuff-N-Uff welterweight champion) Eddie Jackson, Rockymore’s opponent, Junior Gomez, weighed in at 133 lbs., claiming he thought the match was at 130 lbs. A request was made for Gomez to try to make 130 lbs., despite that the original agreed upon weight was 125 lbs. Though Legends received no confirmation that Gomez ever reached 130 lbs., Rockymore agreed to fight regardless.

“[Jacob] tagged him up a few times and he bloodied the guy’s nose and everything, but he was too strong and too heavy for Jacob to handle. . . If the dude would have made weight, Jacob probably would have ate him up,” Jackson said of the pairing. 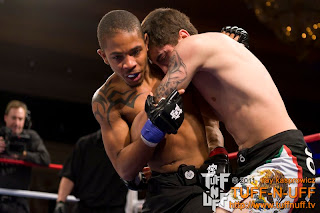 Having the obvious reach advantage, Gomez started in with jabs, but Rockymore didn’t hesitate to fire combos right up the middle, bloodying up Gomez’ nose for his efforts. They clinched and worked for position, with Rockymore landing some knees. Unfortunately, one of them caught Gomez south of the border. Rockymore landed some more knees from the clinch and worked for a hip toss. Round two saw both men trade combos. Rockymore worked for a single-leg takedown, but Gomez blocked with underhooks and swung Rockymore down. Gomez kept side control and tried to circle behind Rockymore, who likewise blocked that advance by holding onto the single-leg. In the final round, Gomez landed a head kick that Rockymore no-sold and stalked him around the ring. Rockymore alternated between throwing combos and knees to a takedown attempt, and had Gomez in a Thai clinch at the match ended.

“The first round was good. I busted his nose and got in some strikes. After the second round, my arms were gassed from clinching with a bigger guy. Should have stood back and struck with him like I did in the last one. . . I won the first round. I know that,” Rockymore said of his match. 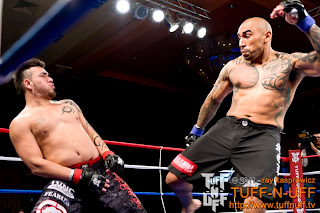 Zavala landed the first shot with a leg kick, but Garzon responded with wild lefts and overhand rights. Zavala was controlled, circling away and getting Garzon’s pace. Heavy fists started flying before Garzon shot in and Zavala controlled him with underhooks. Garzon broke away, giving Zavala the chance to land a massive left to Garzon’s temple. Zavala got one more shot in on the ground before the referee stopped the bout at 1:33 of the first round for the KO finish.

Zavala’s debut was a long time in the works, with several false starts in the year or so prior. Matches falling out are far from a rarity in amateur MMA, but after his last opponent backed out literally ten minutes prior to match time, at a Total Fighting Alliance (TFA) show in July last year, the anticipation of getting that first match started to test Zavala’s patience. 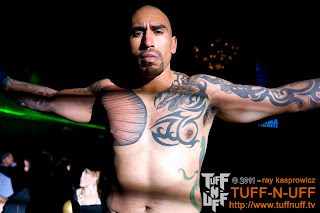 “His attitude going in was ‘fuck, I hope it’s not going to be another one where the dude bails out,’ but when he found out it was going to be official, his whole demeanor changed,” noted Jackson. “He jumped 10 notches on taking it seriously. He was like ‘this shit’s about to go down.’ His whole attitude changed. He was happy, he was excited, he was nervous. . . His family and friends were there. Everything played out the way it was supposed to go down.

The weekend was also a new chapter for Jackson, whose last trip to Sin City was a three-round dream-come-true, as he won the Tuff-N-Uff welterweight championship, an accolade he’d been chasing for two years. For this event, however, Jackson assumed cornerman duties for the first timee, as teammate Chris Brady did late last year on several shows. Ironically, the focus and intensity is no different than when he’s the one scheduled to fight.

“For some reason, going up there, even if I’m cornering, I still get the jitters. Because every time I go up there, it’s like I’m going to war. . . this time around, cornering my boys, I got a different perspective, from the outside looking in. I can see what [Legends head trainer Chris] Reilly and Conor [Heun] are looking at. And I can see it too. . . They’re the eyes and ears for what you can’t see or hear [as a fighter in the ring]. Because sometimes the nerves get the best of you and you block everything else out. That corner tells you to do this, do that. That’s like a lifeline. And I didn’t realize how important that was.“ 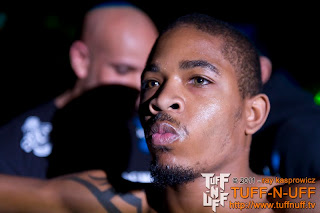 As for Rockymore, despite not getting the win, he feels that fighting for Barry and Jeff Meyer marks a major turning point for his amateur career, one that he’s anxious to embrace with his next match: “That was the biggest fight that I’ve had. The first two fights are alright, but Tuff-N-Uff is where you want to be as an amateur. It was a bigger crowd, a bigger entrance,” he said. “I’m going to be way more ready than I was for my last fight. I’m gonna gain a lot of weight, put up those protein shakes, get that cardio up. I’ll be ready to go next time.”

Legends MMA is sponsored by X-Pole. Tuff-N-Uff’s next event is February 11th at the Orleans Hotel & Casino.