It was a rare dual night of fights for Legends MMA on February 18th, as welterweight Alan Jouban made his long-awaited pro debut at Tachi Palace Fights in Lemoore. That same night, Legends trainer Amir Rahnavardi led several of his stable of fighters from Tim Bond’s Bond Squad and Sidyodtong in Pasadena to battle at the first Combat Fight League amateur show of 2011.

Tachi Palace Fights 8: All or Nothing 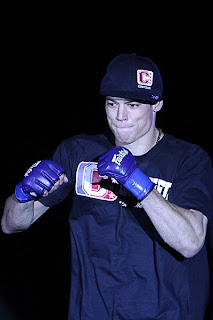 “I feel blessed at the moment, because I had a bad year in ’09. Just work, and problems in my life, and injuries. In ’10, everything came together. I got my five fights out of the way, and me and [Legends head trainer Chris Reilly] decided to go pro. I was kind of nervous going into 2011, thinking ‘how am I going to top 2010?’ It’s starting out with a bang already. I’m really optimistic for the future.”

Indeed, the pendulum has swung in the other direction for Alan Jouban, who, after several start-and-stop career moments, is now fully under way as a professional MMA fighter. Less than one year ago, Jouban made his amateur MMA debut, a 14-second head kick KO in the first round at a Tuff-N-Uff event in Las Vegas. And as if he was setting a trend, he’d follow that up with three more first-round finishes and a no-brainer unanimous decision throughout the year. Of course, any fighter would want a track record like that, but in graduating to the pro ranks, this also raises the bar in expectations of performance.

“I was definitely super-nervous about this fight, because A) it was my pro debut, B) I felt like I had a lot riding on my back. Reilly kind of put his name out there and spoke pretty highly about me. So I felt a little like not only was I carrying my name, but Reilly’s name, and the gym’s name on my back. My biggest thing is I don’t want to let people down. I told so many people to watch it online. And then I ended up having a good little crew of 20-25 people come up and watch,” he recollected.

There wasn’t much to the match, as Jouban landed a single knee as Griffin shot in for a takedown, then followed up with rights until the referee called the fight for the KO at 0:15 of the first round.

“I knew he was an amazing wrestler, but I didn’t know if he was going to be an amazing wrestler who adapted well to MMA or if he was this great wrestler in college and he doesn’t really know that much about MMA yet. That was the biggest thing running through my head. Is this guy gonna try some dirty boxing and take me down, or is he gonna shoot right away with no chance of even striking with me,” he said.

Ironically, this match also continued the friendly rivalry between Legends MMA and Xtreme Couture. Griffin was a University of Oklahoma grappler and the younger brother of Xtreme Couture’s Tyson Griffin (14-5, fights in the UFC), who was in Kyle’s corner. But the odds were even, as Jouban’s brother Chris, who had never previously seen Alan fight live, flew out to work Alan’s corner.

“I told him, after the fight, that they were going to have to fight. I don’t think he was too thrilled about that,” joked Jouban.

Perhaps most ironic about all the buildup to Jouban’s fight is that besides everything else, the Legends welterweight was also battling a case of food poisoning that day.

“I wasn’t holding down any liquid, and honestly, I kept running to the bathroom every 20 minutes. My stomach was giving me so much trouble. My stomach kept cramping up. I remember thinking ‘I don’t want to put on my Thai cup until the very last minute, because I need to use the bathroom,” he remembered.

“I was worried that if this fight went too long, that if he got me in a guillotine or something – I was like ‘man, if he punches me in the stomach hard enough and my stomach isn’t good. . . Thank God I knocked him out in 15 seconds, because I ran to the bathroom immediately after the fight.

In other Tachi Palace Fights action: 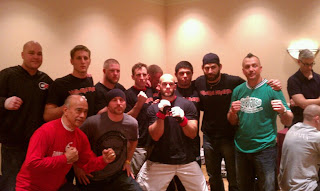 That same night, when the rain was ground-and-pounding on the Valley, Legends trainer Amir Rahnavardi led his mix-and-match squad of gypsy fighters to Combat Fight League’s inaugural “MAYHEM at the MARRIOTT” amateur event in Woodland Hills.

On this night, Rahnavardi had three protégés from the Bond Squad in Camarillo and one, Eddie Estrada, from Sityodtong, where he also trains fighters.

“I cornered six guys, but really, only four out of those six guys train regularly with me. I went three-for-four, but my heart, I feel like I went 4 out of 4. So I was extremely proud of how my guys did. I thought they did fantastic,” Rahnavardi said of the night.

Estrada beat ‘hometown hero’ Marc Terre of West Coast Jiu Jitsu (the gym most closely connected to the show) via split decision, earning him Fight of the Night honors. Meanwhile, Andrew Mostowa and Richard LeRoy, both Bond Squad fighters, finished their opponents in the first round.

“Everybody did their best and tried really hard,” noted Andrew.

Pinckard kept the pressure on Weiss throughout round one, bulling him into the fence on the ground, then throwing rights while holding Weiss with a front headlock. Weiss escaped and broke away. Pinckard tried for a takedown, and when he couldn’t, held Weiss against the cage and peppered him with rights. Round two saw Pinckard charge in. He eventually got Weiss to the ground, took his back, and threw shots from behind. Weiss escaped up, dropping his guard and walking away. Pinckard followed and threw a few more shots before referee Cecil Peoples called an end to the fight.

Joel Pinckard was awarded the victory by TKO, R2.

“Jake used to wrestle 170 or 184 in high school. I think this is gonna be inspirational to cut the weight. His wrestling skills are phenomenal, but [Pinckard] had 25 pounds on him and just outwrestled him,” said Rahnavardi about the fight.

Mostowa threatened several times in round one with a triangle choke and other submissions. Del Riego landed a hard right on Mostowa, who almost dropped, but caught himself and shot in for a takedown. Del Riego ended up on top, but Mostowa prevented him from advancing position until referee Peoples ordered for a stand-up. Del Riego got another takedown and threw rights as the round ended. In the final round, Del Riego pushed in with headshots and scored takedown, but Mostowa worked for a guillotine, then a kimura. Mostowa rolled on top and ground-and-pounded from full mount, and ended the round threatening with a rear naked choke.

“After every round, Pete had the guy in a submission. If there was 30 seconds more in each round, he would have submitted the guy in every round. And the guy was like 10 pounds heavier than Pete. . . Cecil Peoples was the referee and he goes ‘dude, your guy won that fight’,” commented Rahnavardi.

Both men came out swinging in round one, with Terre getting the better of the exchange. Estrada got Terre against the cage and threw some knees, which Terre returned. Estrada controlled Terre with a clinch around the neck and collar, but Terre got him to the ground and mounted. Estrada bucked and got top control as the round ended. Round two saw Terre charge in with counterstrikes off Estrada’s various kicks. Terre pulled Estrada to the ground, but Estrada was able to keep his balance and throw punches from top position. Rounds were split one apiece going into the third, where both swung and clinched in the middle. Both men were content to swing from afar, throwing low kicks and looping headshots. Estrada clichéd Terre against the fence and threw knees for most of the rest of the round.

“They switched the opponent last minute, so we got [Terre] at the weigh-ins. Eddie is just a beast. He trains under Walter at Sityodtong, and he listens to directions real well. Eddie’s definitely gonna be someone to watch out for,” said Rahnavardi.

The match was quick for LeRoy, who threw an overhand right and followed with a double-leg takedown. He got Kreple to the other side of the cage and took him to the ground, where LeRoy got mount and finished with punches.

Richard Le Roy was awarded the victory via TKO, R1.

“I think Dick is going to get to world class level. He’s 20-years old. He’d been training in less than a year. Tim [Bonds] gave him his blue belt that night in the ring. He’s definitely a guy to keep an eye out for.”

The two started out by trading kicks before Window grabbed for a takedown. Mostowa went to his back, but Windom didn’t follow. Mostowa got up and tried for a trip of his own. Windom tried for a hip toss, but Mostowa kept his balance and stayed on top. When Windom tried to switch out and escape, Mostowa followed him and got a rear naked choke, finally getting the tapout in round one.

“I felt like for this one, he was going to try and make sure it didn’t go to another decision. . . With his flexibility, I think a lot of people aren’t used to that. So when it goes to the ground, it’s going to be real hard to keep him down. He can really sort of get out of any situation,” noted elder brother Pistol Pete.

Mervau charged in and clinched with Hernandez, who switched position, clinching Mervau against the cage, throwing knees for awhile. Hernandez got Mervau to the ground three times before getting full mount at round’s end. In round two, Hernandez got a single-leg takedown as Mervau charged in. Hernandez took his back and threw punches until referee Ray Rothfelder ended the match and awarded Hernandez the win by TKO.

“Shane is a big guy, and real strong, but at the same time, that was his first fight. And he’s going up against a guy that has a lot of experience and is real good at wrestling. I think it’s just a good learning experience. I don’t think anyone’s going to count Shane out for anything. He’s going to come back even stronger in the next one,” commented Pistol Pete.

For many fighters, training at several different schools is a standard thing, and in working with Rahnavardi, his team has that advantage by default, because of his own residency at so many different schools. Several weeks before the CFL show, Rahnavardi rotated training sessions, giving them a chance to go live and spar with some unfamiliar faces. They spent several days per week working in the Legends’ cage, and likewise stopped in at Sityodtong for some striking practice.

According to the Mostowas, the change in scenery is a welcome challenge.

“It keeps you on your toes. You walk into a new place and you don’t know what to expect. You don’t know who’s going to try to knock your head off or whatever everybody else has,” Andrew said.

Pistol Pete concurred, explaining “Every time we’ve been [to Legends], it’s been a different group of guys that we’ve sparred with. It really helps to go against a guy that you don’t know, because that’s what you’re doing when you go out there and compete . . . it’s just going to give you that preparation that you need to go in there and do good on fight day. Amir, with him moving around to all these different places, all his students sort of can make each other better, and work together.”

“I’m excited about what’s going on with these guys. I think they all have really bright futures to come,” said Rahnavardi.

In other CFL: MAYHEM at the Marriott action:

Amir Rahnavardi and his team are sponsored by Valhalla Brand.